As we reported last year, World Bank President David Malpass made a telling admission. In a nutshell, Malpass stated that Pfizer won’t go into countries unless those governments grant them immunity from any an all damages caused by their vaccine.

If the country allows individuals or organizations to sue after Pfizer hurts them, Pfizer stays out.

“Pfizer has been hesitant to go into some of the countries because of the liability problems, they don’t have a liability shield,” Malpass stated.

Imagine the audacity it takes for a company who is ostensibly helping to stop a pandemic, to tell people they can’t have their “life-saving” medicine unless said company can harm them with impunity. There is no need to imagine, as this is the situation in which we currently find ourselves.

Refusal to take responsibility for a product with many known side effects — which was mandated on people throughout the world without their consent — naturally doesn’t sit well with folks who care about their health. For this reason, a massive black market formed around fake vaccination certifications for people who didn’t want to lose their livelihoods or worse, over forced vaccinations.

While we were told that this black market was the work of criminals and staunch antivaxxers, an investigation in Spain found that more than 2,200 famous people, including top medical personnel and the leader of one of the country’s largest pharmaceutical companies — have been buying fake vaccination certificates.

A report from Euroweekly painted this discovery as a bad thing — as if avoiding state-sponsored forced medical procedures by buying a fake piece of paper is somehow unethical.

“What is disconcerting, is that many of these people are involved in professions that meant a high level of contact with others. Essentially, they cared so little for those around them, they did not bother to ensure that those they came into contact with were kept safe and free from Covid-19,” the report stated.

But as the world would find out, absolutely none of the mandated vaccines stopped transmission or infection.

A telling notion about the safety of the vaccines is the fact that on that list of 2,200 people who bought fake vaccine cards is President of PharmaMar, José María Fernández Sousa-Faro, one of the largest pharmaceutical companies in Spain, whose company was involved in researching Covid-19 vaccines.

WHO Confusion on People’s Immunity and Effectiveness of Covid Vaccines: Contradictory Document by Technical Advisors

The fact that Sousa-Faro refused to get the jab while his own company was researching it, led “many to ask whether vaccinations were necessary or safe,” the report stated.

“The 76-year-old businessman, who has not yet been summoned to testify, was included in the lists to reflect that he had received the third dose,” states the report.

Not mentioned in the report is the question as to why so many of these top doctors, rich business persons, and scientists refused to take the vaccine? What did they know that the public at large did not?

The scam was run by a nurse at La Paz University Hospital who made over €200,000 for adding more than 2,200 people to Spain’s national vaccination database. He has since been arrested and will likely face steep penalties.

As we reported last year, the United States government also went after folks who sold fake vaccination certificates with a vengeance. A Chicago-based pharmacist was arrested after selling more than 100 official Covid vaccination cards on eBay after obtaining them from the CDC. He was slapped with 12 federal counts for theft of government property and is facing life in prison for it. 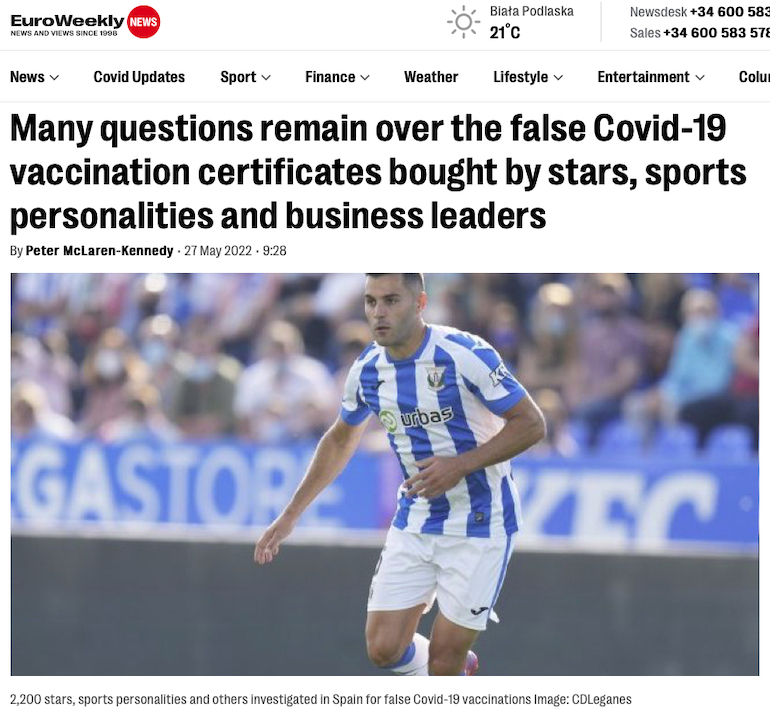