“Allah is great”. ISIS jihadists Insult Italian Ambassador Killed. Then Threaten: “Now US and French ones”

For about 24 hours, we pondered whether to report this disgusting and terrible news. We do it now only because the Arab site Hadasnow.com reported it with great prominence. And therefore it seems only right to report it although the primary source is on the one hand very reliable and on the other accustomed to speculating in the media on terrorist threats launched by ISIS.

“Allah is great!” It is one of the crudest comments intercepted in the chats of jihadist extremists by Rita Katz, the famous analyst of the American site SITE (Search International Terrorist Entities Intelligence Group), a private intelligence company based in Washington. The sentence referred to the barbaric assassination of the Italian ambassador to Congo, Luca Attanasio, of the escort carabiniere Vittorio Iacovacci and of their Congolose driver Mustapha Milambo.

Italian Ambassador and Carabiniere Killed In Congo. Suspicions on ISIS that released 1,300 Prisoners from Jail months ago

At the moment there have still been no claims of the murderous attack by the Islamic State of Central Africa, one of the main suspects for the ambush as highlighted by Gospa News, but the fans of the Black Flag cutthroats have spared no international intimidation by foretelling that now the same fate will befall other Western diplomats. What the reliability of these comments is is to be proven but it would have come to the attention of NATO intelligence officials in Africa and the Middle East who rightly do not want to underestimate the possibility of real dangers.

«SITE intercepted chatter among #ISIS-linked supporters responding to the death of Luca Attanasio, w/ some questioning him being so far from the capital in the restive North Kivu province & others calling for similar attacks on ambassadors from France & US» posted Rita Katz in a Tweet.

«The US intelligence site (SITE) reported that after news emerged that the Italian ambassador to the Democratic Republic of the Congo, “Luca Atanasio”, was killed in an attempted kidnapping, jihadists expressed their joy and called for the two ambassadors (American / French) to be killed» wrote Hadasnow. 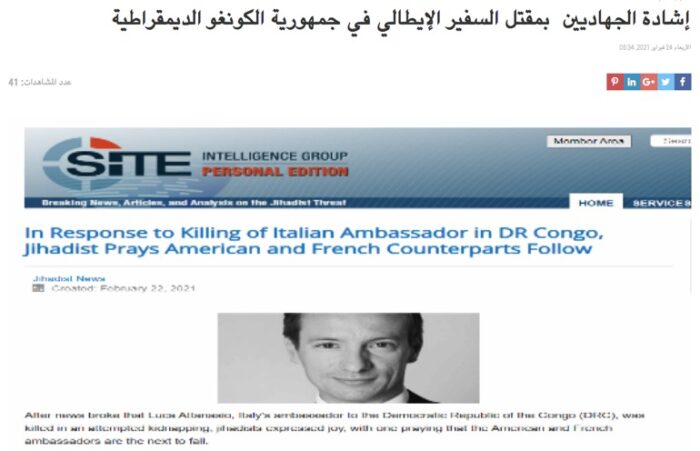 The media in Arabic then added «that the users of the jihadist media platform –  One of the pro-Islamic State forums – they commented on that incident, as they published press reports about the incident along with their comments, which included the usual exaggerations of “God is Great”, while some questioned the reason for the presence of “Atanasio” in North Kivu province, away from the capital, Kinshasa».

The Islamic site did not, however, report that the Italian diplomat was traveling for a UN mission of the World Food Program while he was the victim of the bloody ambush on which the Rome Public Prosecutor’s Office opened an investigation for kidnapping and murder of terrorist matrix.

A total of four blows caused the death of the diplomat and the military in Congo. The victims were hit by two hits each. The CT scan revealed that the bullets went through the bodies from left to right.

The remains of the ambassador and the carabiniere returned to Italy last night. According to what emerges from the autopsy, the ambassador was hit by blows to the abdomen and the examination identified both the entry and exit holes. No metal residues were found. As for Iacovacci, he was hit in the side area and then at the base of the neck where a bullet from an AK47, a Kalasnikov, was identified. The carabiniere’s body has multiple fractures in the left forearm. This suggests that the bullet that stopped in the neck hit the fractured limb first. The prosecutor has ordered ballistic tests.

The use of the Kalashnikov assault rifle, a favorite weapon of terrorists and in particular of ISIS, confirms the advances of Gospa News on the alleged perpetrators of the ambush on which the Carabinieri del Ros (Special Operational Group) of Rome already sent to Congo by the Italian judiciary.

The military investigators who arrived in Congo on delegation from the Rome Public Prosecutor’s Office, will acquire the minutes of the testimonies collected by the local investigators of the people present at the scene of the ambush. Among these also the story of the Italian WFP official, Rocco Leone, the Italian survivor.

«Among the activities that the Carabinieri del Ros will carry out in Congo there is also that relating to the weapons used by the rangers who intervened in the place of the ambassador Luca Attanasio and the carabiniere Vittorio Iacovacci. The Ros will acquire information on the weapons supplied to the body that takes care of the Virunga Park. According to a reconstruction, there would have been a fire fight between the rangers and the kidnappers and it is at this stage that the two Italians would have lost their lives» Italian press agency ANSA reported.

Although the first testimonies reported a brutal execution by the terrorists, who after killing the driver killed the carabiniere as confirmed by the Kalashnikov bullet, the slightest doubt remains that the ambassador was mortally wounded and then died in the Goma hospital was not hit by the shots of the Congolese military who rushed to free him.