The Intel Drop is an unaligned new source for the intelligence and financial community, founded by American Intel expert Gordon Duff.

Other than by staff writers, stories are accepted based on substance and value.

Oversite for TID includes active and retired intelligence professionals who are collectively fearful about the levels of censorship, control and outright “black propaganda” being fed to the general public.

THE BEST LATEST INVESTIGATION ON THE INTEL DROP

The commander of the Islamic Revolution Guards Corps (IRGC) Navy says speedboats operated by the force have been equipped with radar-evading stealth technology, which can greatly reduce the distances at which they can be detected.

“As you know, the IRGC Navy is a completely strategic force and is in possession of all types of ammunition, ranging from tanks for naval battles to fixed-wing aircraft and drones,” Rear Admiral Alireza Tangsiri said on the sidelines of a ceremony in the Iranian capital Tehran on Monday. 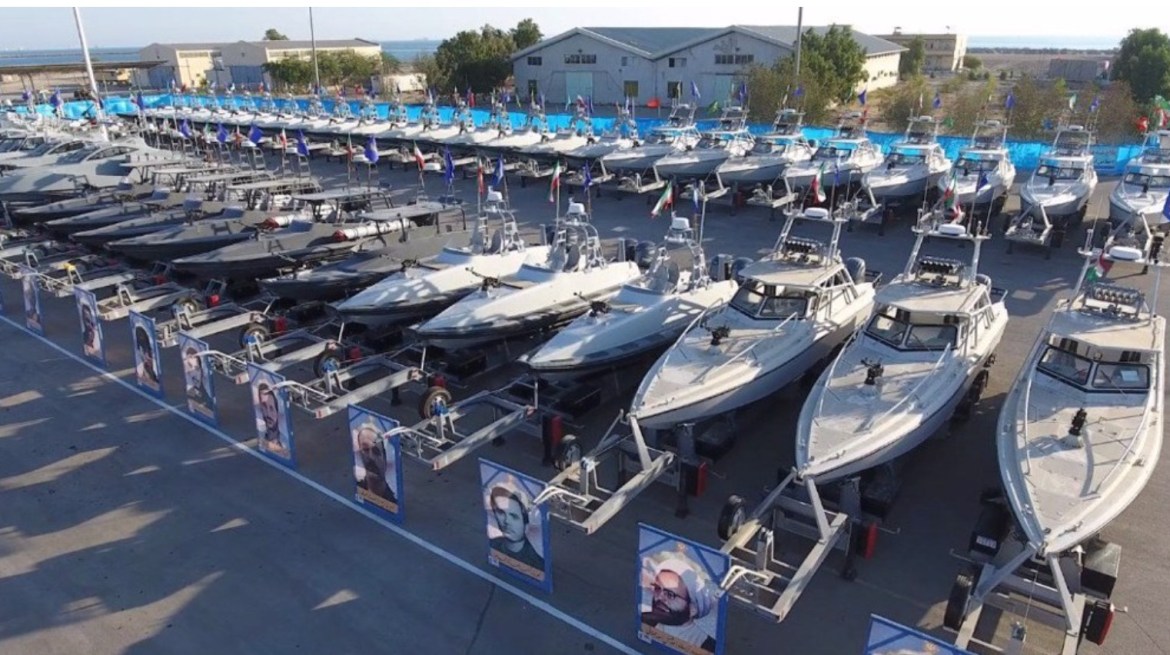 “Therefore, it has always been in contact and close cooperation with other forces and military organizations like the Ministry of Defense to produce various military systems and equipment,” Tangsiri said.

He underlined that his force proudly utilizes equipment manufactured by domestic knowledge-based companies, including a series of drones and quadcopters.

The Iranian commander highlighted that the hull material and shape of the IRGC Navy’s speedboats employ stealth technology construction techniques so as to ensure they would remain undetected by radars. (continues to read in The Intel Drop)

The Secret Wars of the Pentagon

For many years, various US administrations have been waging proxy wars as part of the secret 127e program, writes the American Internet portal Intercept . In the period from 2017 to 2020, the Pentagon, authors of the article Nick Thors and Alice Speri point out, launched 23 programs of so-called proxy wars, primarily in the Middle East and the Asia-Pacific region. It cost US taxpayers $310 million.

“Through 127e,” the newspaper writes, “ the United States is arming, training and providing intelligence to foreign forces. But unlike traditional foreign aid programs… 127e partners are then sent on US-led missions against US enemies and to advance US goals.” 127e-related hostilities may not have the congressional authorization required by the constitution.

The Intercept explains that the 127e program allows US special forces to conduct “counter-terrorist operations” in cooperation with foreign and irregular partner forces around the world with minimal external oversight.

Retired generals who are intimately familiar with the 127e program, known in military jargon as “127-echo,” say it is extremely effective against militant groups, reducing risk to the US military.

Almost no information about these operations is shared with members of Congress or State Department officials. As a rule, it is not even known where these operations are carried out, their frequency, goals, names of foreign forces with which the United States is cooperating. Critics of the program warn that it could lead to unanticipated military escalation and the US’s involvement in a dozen conflicts around the world because 127e does not allow for oversight by foreign affairs officials. 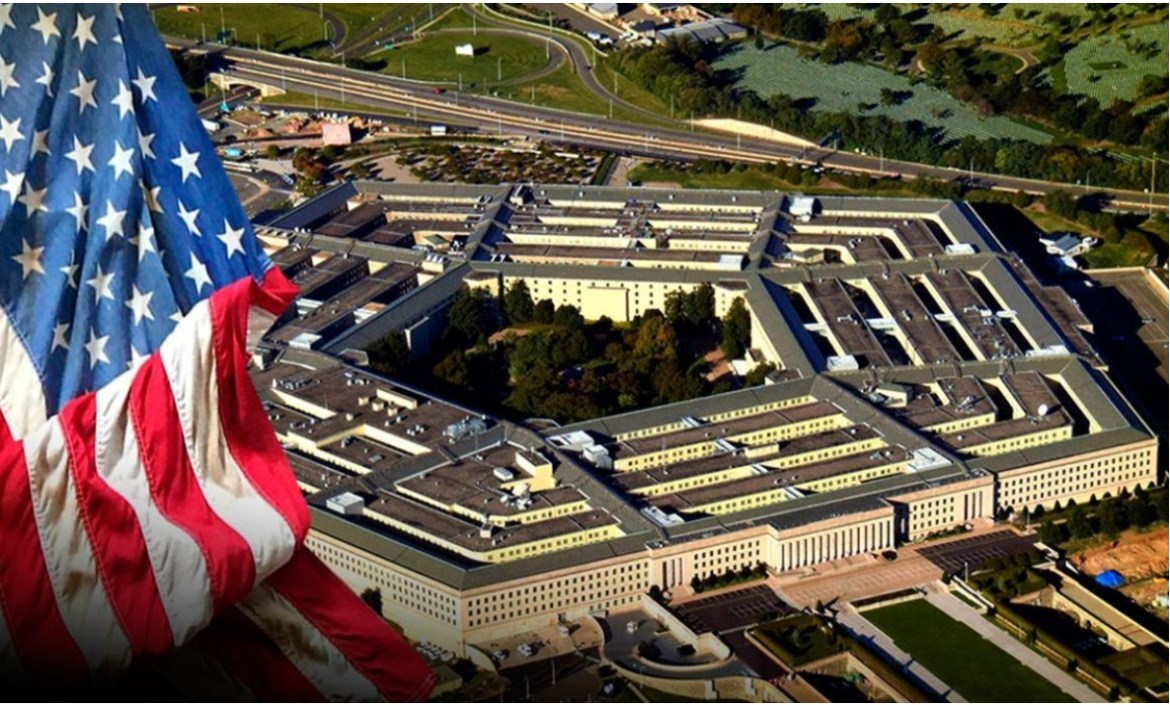 The Pentagon and the Special Operations Command decline to comment on actions under the 127e program. “We do not provide information about the 127e programs because they are classified,” SOCOM spokesman Ken McGraw told Intercept . The Pentagon prefers to conduct its operations with minimal oversight and has been doing so for many years.

As the Italian newspaper Giornale notes , commenting on the Intercept investigation , compared to the traditional military assistance provided by the United States, the 127e program is surrounded by an aura of mystery. The newspaper draws attention to the fact that crimes were often committed during operations under this program. In Egypt, for example, “arbitrary arrests, kidnappings, torture, extrajudicial executions, and possibly illegal air and ground attacks on civilians” were recorded .

According to a study conducted by the Watson Institute at Brown University, the Italian newspaper notes, there are 85 countries in which the US government conducted counter-terrorism operations in 2018, 2019 and 2020, ranging from air strikes on military installations to the training of foreign military and police forces.

The fact that the Pentagon systematically conducts covert military operations abroad has been reported before. In 2021, Newsweek magazine wrote that over the past 10 years, the Pentagon has created the largest secret army in history. 60,000 people with fictitious names and fictitious lives are actively invading the real life of other countries. “A force more than ten times the size of the entire CIA covert agency, ” noted Newsweek , “ performs secret missions … both in military uniform and under civilian cover, in real life and on the Internet, sometimes hiding in well-known private companies and agencies.”

The secret army of the Pentagon can be conditionally divided into three large groups. Approximately half of the 60,000 are combat units, covert fighters sharpened in special operations. Traditionally they operate in the Middle East and Africa, but more recently they have been recruited for covert operations behind the lines of US enemies such as Iran and North Korea. The second division is counterintelligence, data processing, military linguists. And the third is cyber fighters… (continues to read in The Intel Drop) 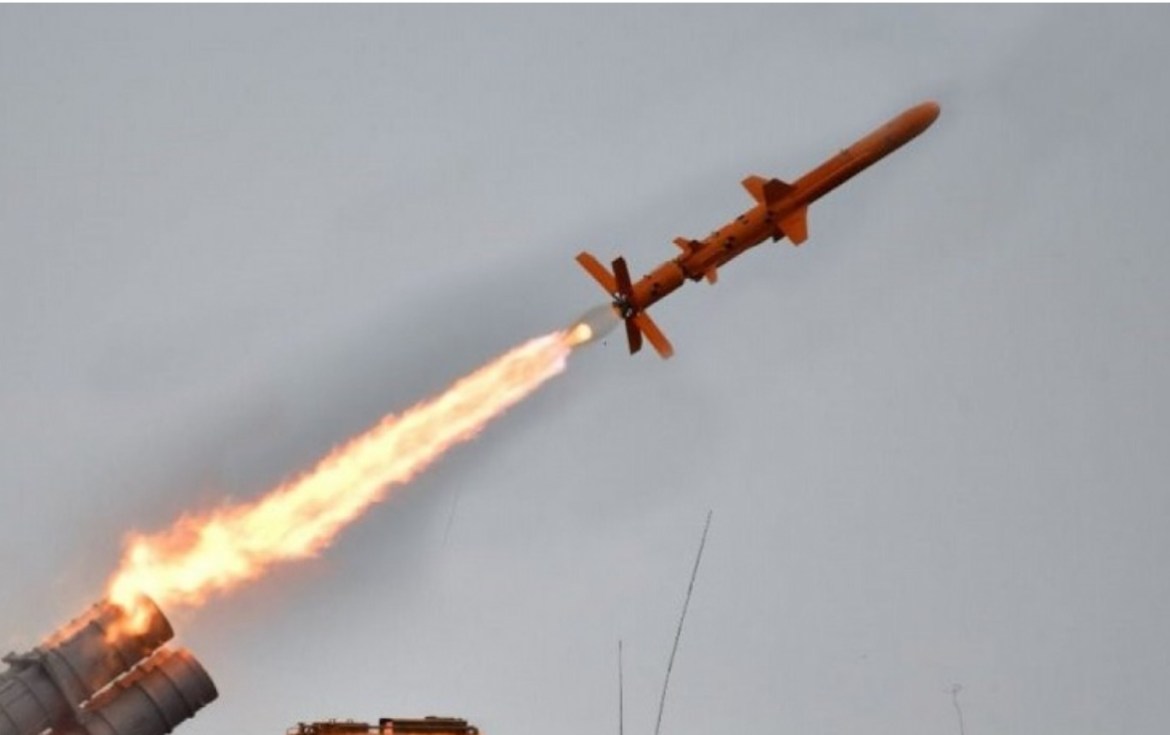 After years of indiscriminate bombing of Syrian infrastructure by Israel, it was reported, in mid-May 2022 that Russia fired a “warning shot” S-300 missile “near” Israeli planes. These planes were attacking a military facility near Latakia and, as is generally the case, collateral damage, meaning dead civilians, are the norm.

In fact, I just received an intelligence report out of Amman, Jordan stating that the US has unleashed a massive program of recruitment and training of militants around the world to unleash on Syria, Iraq and Iran in coordination with Israel.

We also have confirmations that the war in Ukraine was orchestrated by Israel as well and that this move in the Middle East is part of the broader war plan that NATO is only a part of.

Intelligence sources only talk of the criminal network of “bankster oligarchs” that run NATO and hide their far more sinister goals behind “globalism” and fake security concerns.

But before getting into a touchy subject, such as Israel’s long history training and arming Nazi units in Ukraine against Crimea and Donbass/Lugansk, something else must be examined also. (continues to read in The Intel Drop…)

His father broke his back as a miner in Sheridan in Wyoming (US), he, after this article, will become famous for opening a dozen suspected bacteriological laboratories in Ukraine and Georgia with which the American Obama-Biden administration actually violated the agreement signed with Russia for the non-proliferation of biological weapons in the countries of the former Soviet Union.

Leon Edward Panetta, was born on June 28, 1938 in the United States of America, in Monterrey (California), thus crowning the dream of his father Carmelo “Frank” and his mother Carmelina Maria Prochilo, who emigrated from Italy to make their fortune beyond Ocean. After opening a small restaurant they sold it to buy a ranch with a peanut plantation and to have their only beloved son study. 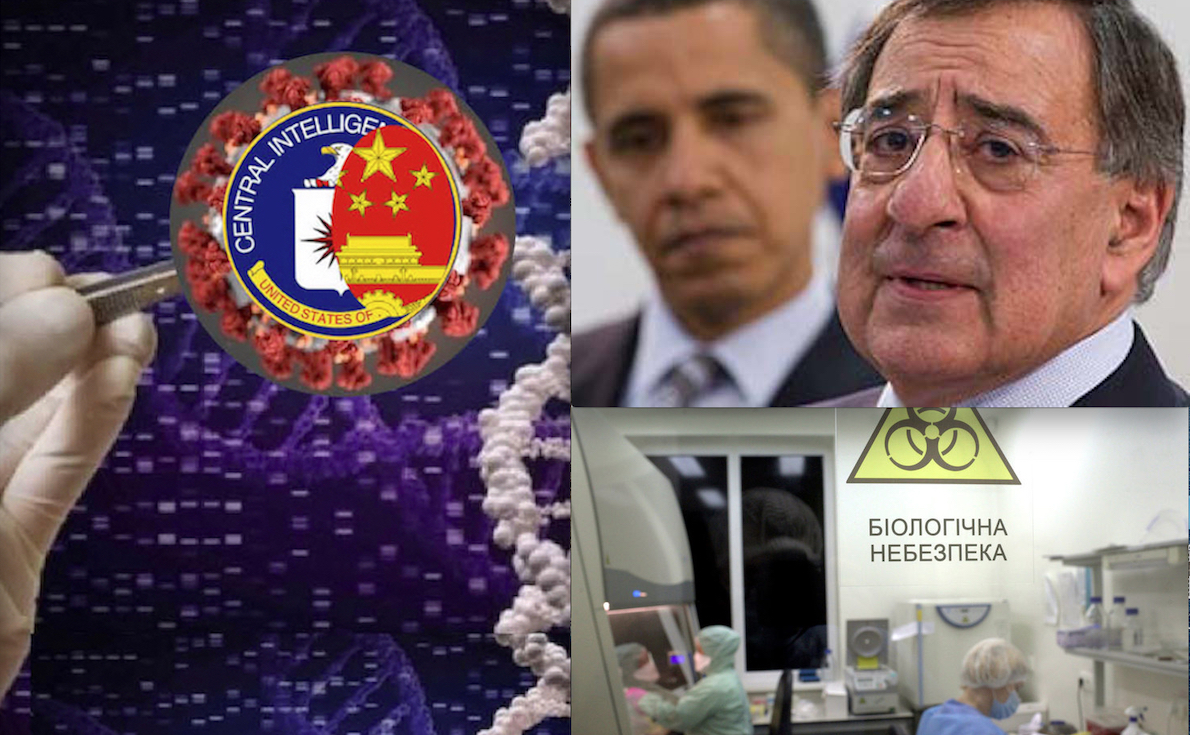 From Siderno, a stronghold of the ‘Ndrangheta in Calabria, they did not bring with them any suspicions of the mafia, but only the dialect with which Leon spoke to his cousin Domenico Panetta, twice Mayor of Siderno, when he went to visit him at the White House. The latter did not hesitate to make a great media fuss when his relative first became Bill Clinton’s Chief Cabinet (1994-1997) and then director of the Central Intelligence Agency (2009-2011), the American counter-espionage, thanks to the will of Barack Obama. (continues to read in The Intel Drop…)

The north of the Donetsk People’s Republic remains the hottest battlefield in Ukraine. Russian-led forces are slowly approaching the Savyansk-Kramatorsk region in an attempt to surround the Ukrainian grouping.

Amid fierce clashes, Russian pressure on Ukrainian forces in Slavyansk from the north is increasing. 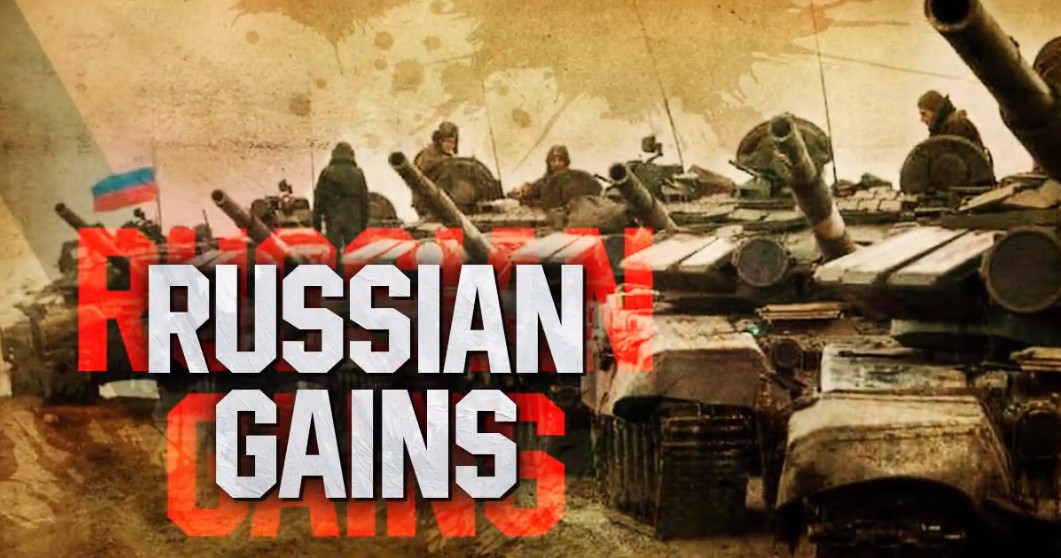 After prolonged clashes, DPR military officials declared full control of the village of Bogorodichnoe located on the right bank of the Seversky Donets River west of Svyatogorsk. Ukrainian forces were also repelled from their positions in the resort area of the Blue Lakes, in the area of Krasny Liman.

To the east, Russian-led forces claimed new victories on the Bakhmut-Soledar-Seversk front lines. The villages of Tripolie and Vladimirovka came under their control. The recent gains allow joint forces to develop their advance towards both Soledar and Bakhmut and cut Ukrainian communications between the two towns.

The allied forces continue to develop their offensive towards Seversk from the Lisichansk area. Russian missiles and artillery are suppressing the positions of the Armed Forces of Ukraine from the heights around the town and in forest areas.

Meanwhile in Lisichansk, the mop up operations in the city and surrounding villages were reportedly completed. (continues to read in The Intel Drop…) 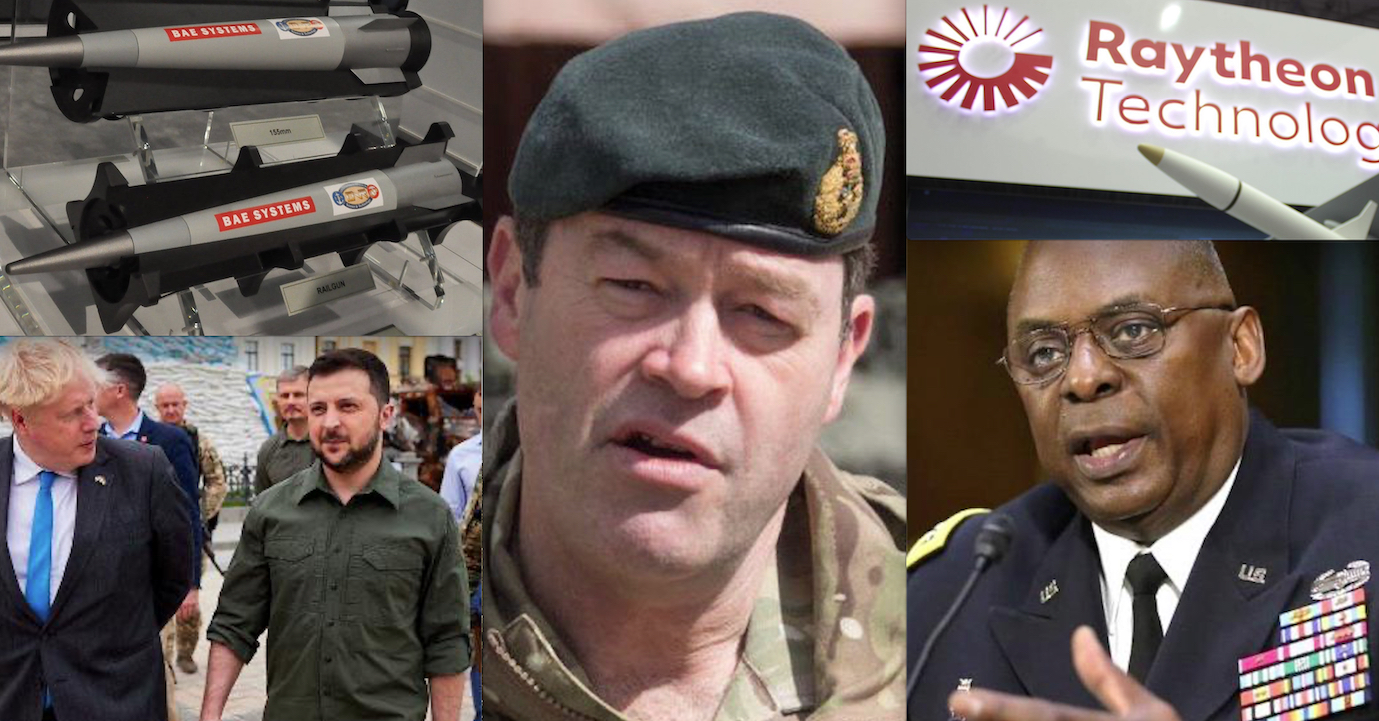 It is necessary to prepare to” fight against Russia “for what could be the Third World War. This was stated by the British general, Patrick Sanders, in his first speech since taking up the post of Chief of Staff of the United Kingdom army this month. “We are the generation that must prepare the army to fight once again in Europe” since the Russian invasion of Ukraine undermines global stability».

This sentence takes on considerable importance both for the author of the statements and for the information portal that reported it.

A general of the United Kingdom, in fact, went so far as to announce what many times declaimed by the President of Ukraine Volodymyr Zelensky about “a new world war” to scare Russian President Vladimir Putin.

The senior British officer actually spoke only of “war in Europe” while Nova News added the words “world war”. This could appear as a journalistic stretch were it not that this online newspaper is sponsored by the Italian arms industry Leonardo and was born in full Covid-19 emergency due to an agreement between the Nova Agency, which has always been close to military intelligence issues, and the Italian Government, in the wake of collaboration already in place with the Ministry of Foreign Affairs. (continues to read in The Intel Drop…)