In response to the some requests from friends and readers who highlighted the excessive length of the Gospa News reports on the hidden background of the pandemic – exhaustive and reliable investigations precisely because they are based on a wealth of carefully verified details – we have created the summary of the 9 dossiers so far published on CoVid-19 (or SARS-2) before devoting ourselves to the following; which will be shorter because they will refer to this recap.

In 100 lines here are clues and authoritative accusations in support of the pandemic theory triggered by an alleged bacteriological weapon that lead up to the New World Order’s prophecy made by a former deputy director of the Central Intelligence Agency (CIA).

It is at least ascertained that the American counter-intelligence has funded, together with the Pentagon agencies (USAID, DTRA, DARPA), various secret projects in military biological laboratories in China, Georgia, Ukraine and in the USA too. These also include those on 89 CoronaVirus strains (report 9).

1 – THE US EXPERT: “CORONAVIRUS IS A BIO-WEAPON

The first to speak of a bacteriological is the American expert on biological threats Francis Boyle confirming the suspicions of many. He point at the researches in the Bls-4 laboratory in Wuhan, where the epidemic broke out and the hero doctor who discovered it (Li Weinliang) died. Instead he doesn’t mention the 25 military centers for testing epidemic viruses open all over the world by the Pentagon DTRA agency (US Defense Department) as noted in 2018 by Bulgarian journalist Dilyana Gaytandzhieva.

In her investigation, the reporter also describes tests on bio-genetic weapons capable of affecting a specific ethnic group and considered “potentially unstoppable” by a study published in August 2019 by the Center for the Study of Existential Risk (CSER) of the University of Cambridge. A suspicious CoronaVirus research was also launched in 2015 by the British Pirbright Institute funded by the Bill Gates foundation.

The theory of a bacteriological attack is also supported by Jeff Brown, founder with other international journalists and authors of the Bioweapon Truth Commission. Chinese scientists discover that the virus’s protein S has been shaped to hide the mutation of certain amino acids which makes it aggressive. The Communist Party of China accuses the US. Our foreign intelligence source point the finger at the Central Intelligence Agency, the richest and most powerful American counter-intelligence in the world.

It could have been the CIA to spread the CoronaVirus in China and other countries with the use of nano-drones, but whoever had spread it would already have the vaccine. It turns out that the first cyber-insect project to be used as a reconnaissance mini-UAV (or transport of very small payloads) was developed by the US 007 in 1970.

There is now the 10cm Black Hornet 3 mini-helicopter, used by NATO armies, and DragonflEye, a genetically modified dragonfly driven by light. Vaccine research is initiated in Australia by the University of Queensland with support from the UK’s Big Pharma GlaxoSmithKline: these are two countries of the famous “FIVE Eyes” in the USUKA agreement created by the USA with the other English-speaking intelligence of Canada and New Zealand.

The giant GlaxoSmithKLine, finished over the years in the midst of various scandals with judicial investigations in Italy as in the United States, is among the first to make commercial agreements for the vaccine with China as soon as the University of Queensland confirms that it has found a prototype to be tested.

An American and an Israeli company also claim to have already found the antidote, arousing the suspicions of Chinese experts who, meanwhile, have discovered another secret of the CoVid-19 virus: there are at least two genotypes, one of high morbidity but lower mortality, the other more aggressive and more lethal generated by an unidentified human interaction.

The vaccine will become golden given the seriousness of the epidemic. In addition to being a British corportation, GSK is participated in by the largest American investment funds in the Weapons Lobby. Glaxo CEO is also director of Microsoft owned by Bill Gates who, through the international body CEPI (presented in Davos in 2017) finances the vaccine research.

But GSK is also a partner of the Pentagon and its DARPA agency which also operates on biological research in the military. Iran’s Islamic Revolutionary Guards and a former CIA agent support the bio-weapon theory that is almost completely ignored by Italian newspapers.

4 – PANDEMIC ARRIVES AS FORESEEN BY GATES

On 11 March 2020, the World Health Organization declares the Pandemic. As expected by the American billionaire Bill Gates in a 2015 TED conference and then by a somewhat suspicious exercise organized in October 2019, a few weeks before the first outbreak of December in China, just for a CoronaVirus emergency.

At the speakers’ table there is also a former CIA executive, among the main suspects for the pandemic. Among the countries most affected by CoVid-19 are Iran, Washington and Tel Aviv enemy, and Italy which, in January 2020, had restarted the dialogues for a bilateral agreement on Artificial Intelligence.

5 – FROM IRAN AND SRI LANKA ACCUSATIONS ON BIO-WEAPON

Former Iranian President Mahmoud Ahmadinejad wrote a vibrant letter to the UN to urge an international investigation into the bacteriological weapon he believes caused the pandemic. The same request is made at a press conference by the Sri Lankan cardinal Malcom Ranjith, Archbishop of Colombo (affected by the massacres of the ISIS suicide bombers in Easter 2019).

The letter from the former Iranian head of state, unpopular with the Tehran government itself, is ignored by almost all the media in the world. The appeal of the high prelate of the Catholic Church, issued by an Asian agency of Christian inspiration, is published with minimal emphasis only on a few western media.

6 – THE PROPHECY OF THE FORMER DEPUTY DIRECTOR CIA

Avril Haines, thanks to her loyalty to the US Democratic Party, has made a lightning career in the shadow of former President Barack Obama and his deputy Joe Biden (today in the running for the 2020 presidential elections): from graduation to CIA in just 12 years!

She was appointed first deputy director of the Central Intelligence Agency and then deputy White House National Security Consultant, also becoming a biological weapons consultant for the NTI, a Democratic area organization for the study of nuclear and bacteriological threats against the United States.

During a 2018 conference, Haines predicts the risk of a respiratory infection pandemic, just as did in 2015 the same Gates, which finances the Event 201 exercise of October 2019 in which the former intelligence officer was among the protagonists. Deep State’s shadow lurks behind the alleged bacteriological weapon epidemic…

7 – US BIO-LABS IN THE COUNTRIES OF COLORED REVOLUTIONS

Various Western media focuses on suspicious military maneuvers that occurred in 2019. From the American delegation that took part in the Wuhan World Military Games in October to the mysterious suspension of research activity in Fort Detrick, home of the USAMIID (US Army laboratories Medical Institute of Infectious Diseases). At the end of 2019, the Naval Medical Resarch Unit, called NAMRU 3, suddenly moved from Egypt to NATO’s Sigonella NAS base in Sicily, one of the main CIA stations in Italy and the Mediterranean.

The curious coincidence emerges that numerous top secret bacteriological research laboratories of the Pentagon have been opened in the past years in Ukraine and Georgia after the coups of the colored revolutions financed by George Soros, supporter of Democrats in the US as in Europe.

Geopolitical reseacher Galima Galiullina, a doctor of Philospohy with Russian origin but resident in the USA where she collaborates with the Veterans Today website, publishes a detailed article to illustrate the mission of the 122 military doctors sent from Moscow to help Italy overcome the epidemic which killed more than 13 thousand people.

It is a unit of experts in NBCR attacks (Nuclear Bacteriological Chemical Radiological) who arrive in the Italian peninsula not only to disinfect the most affected structures such as those in the province of Bergamo but also to research the hypothesis of the biological weapon.

His speech on Gospa News will be subject to a “censorship” with a negative review by a New York-based site financed by Wall Street experts who is persecuting all the counter-information media in Italy and in the world with the excuse of seeking fake-news without providing detailed reasons for the coarse disputes.

9 – THE DANGEROUS SUPERVIRUS FOUND BY CHINESE AND AMERICANS

The video of a scientific transmission of the TGR Leonardo broadcast by RAI 3 in 2015 becomes back viral for the report on the extremely dangerous “chimera” Supervirus built in the laboratory by the SARS CoronaVirus strain that struck China in 2003. The study was carried out by Chinese Wuhan researchers (as accused by Francis Boyle, report 1).

Whole Italy points the finger at China but the American site Veterans Today, taking up an article by Pravda, reveals that the US government agency USAID, often the CIA tool for regime-change in the world, also funded the project.

Gospa News also focused that the project was created, supported and authorized by the White House during the Obama-Biden administration when lawyer Haines worked in the CIA, before collaborating with Gates and partner universities of one of its private funders. supervirus research.

10 – THE PROPHECY ON THE NEW WORLD ORDER 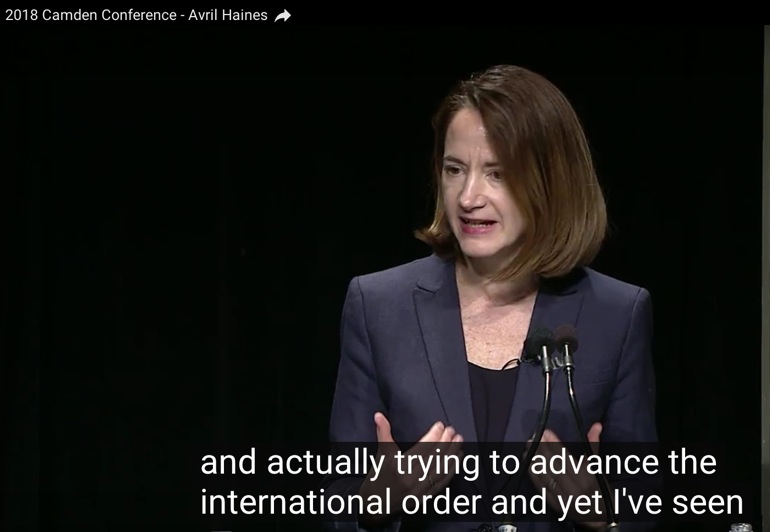 The circle of suspicious coincidences closes perfectly with the aforementioned prediction of the former vice director of US counter-espionage in which, during a conference in Camden in 2018, in addition to evoking the threat of the pandemic from a respiratory pathogen, announces the need for a international order.

It appears as a clear prophecy of the dreaded New World Order wanted by the Deep International State, the occult ethical, political, financial, military committee in which, in the historical bed of the Masonry Armed (from the revolutionary projects of Giovine Italia-Young America to the agreement OSS-MAFIA-AMGOT in Sicily until the P2-Gladio lodge scandal), the interests of Anglo-American bankers-speculators merge with those of the NATO intelligence deviated apparatuses, of the heirs of the Zionist Movement, including the Sayanim collaborators of the Israeli intelligence Mossad, and those of the Sunni Islamic fundamentalists: from the Salafites-Wahabites to the Muslim Brotherhood.

Already the specter of a disturbing geopolitical scenario is already hovering that, between the devastating world economic crisis and the countries weakened by the epidemic, could result in the Third World War, initially in a leopard spot like the one that is still devastating Syria since 2011.

It could begin with a conflict in the Mediterranean and one in Eastern Europe to pursue the common goal of the two components of the Deep State (Masonic deist-atheists and Zionist-Islamist extremists) of the destruction of Christianity and moderate Shiite Islam and the international power which more defends them: Russia, so far the country least affected by the pandemic

We have seen the plots of these subjects of the Deep State, of which a former CIA director of the Dem area has recently admitted the existence, in many other reports on the Lobby of Arms and on the War Zones. But we will see you again in the next on the intertwining between the very dangerous “Made in China-Usa” Supervirus and the Lobby of the Big Pharma of vaccines that bring up to the heart of Saudi Arabia…

N.B. The next articles will be available in the first 12 hours only to subscribers to the Gospa News newsletter who will receive the password necessary for access together with the link to the article.