He has chosen to die in a suicide attack and in the name of the Islamic extremist religion, which had already cost him a sentence for terrorism in 2012 due to ispirated by Al Qaeda, he brought with him the lives of two other people in a sudden attack with a knife, while others three were injured, one of them seriously.

The aggressor, a British citizen now dead due to police shooting, was free with electronic tag altough had planned to put a pipe-bomb in the London Stock Exchange…

In the following hours the ISIS claimed the attack declaring that the man was an Islamic State’s fighter.

Usman Khan, the 28-year-old British man killed by the police on London Bridge yesterday afternoon at around 2 pm GMT has really turned the Black Friday into a day for the British who have awakened with the nightmare of terrorism, with the fear of so-called lone wolves striking without the help of a terrorist cell, without precise sensitive targets and can kill anyone who crosses their path in the streets of a metropolis.

The alert in Europe is high after another attacker wounded three minors with a knife assault in the Dutch city of L’Aja after a few hours. The aggressor would be a man between 45 and 50 years of dark complexion, he is wanted by the police who have not yet clarified whether this can also be considered a terrorist act.

Instead it is now certain that it was a premeditated solitary terrorist act yesterday afternoon at London Bridge. Usman Khan was on probation after being released in December 2018 following a conviction for Islamic terrorism. He also wore an electronic tag that allowed surveillance officers to follow his movements as explained to the English newspapers by the Met Police Assistant Commissioner Neil Basu.

According to the BBC news and security reporters, the man wore what is believed to be a hoax explosive device, a fake explosive belt, for two reasons: to sow panic and to be certain of finding death by not returning to prison.

At 13:58 GMT the alarm was triggered on London Bridge when the Islamic terrorist unsheathed a long knife and began to attack passers-by at random. A man and a woman were killed by the blades of the cutting weapon. Three other people were injured before some people disarmed the aggressor. Then the police succeeded in intervening by blocking and firing him, knowing his danger by virtue of the identification probably occurred through the electronic tag. 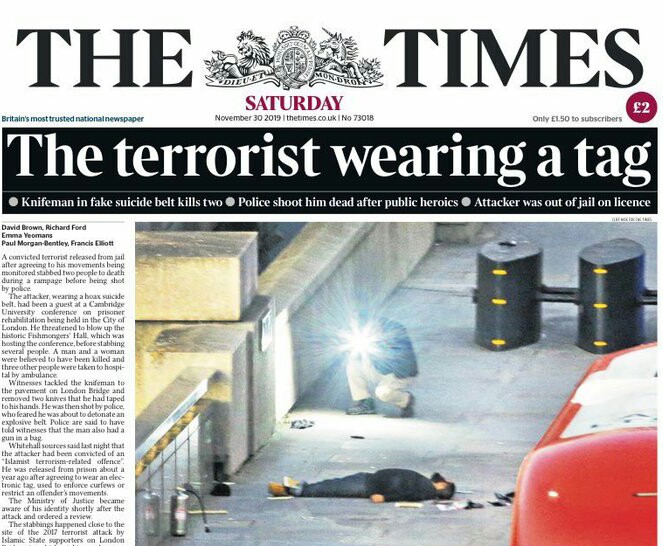 A few minutes before, Usman Khan had attended a conference on the rehabilitation of prisoners organized by the University of Cambridge in a London room, the Fishmongers’ Hall, which he apparently threatened to blow up, located just near the bridge.

«Whilst we are still in the early stages of the investigation, at this time we are not actively seeking anyone else in relation to the attack – he added the police commissioner – However, we continue to make fast time enquiries to ensure that no other people were involved in this attack and that there is no outstanding threat to the public».

In 2012, Usman Khan was sentenced to indeterminate detention for “public protection” with a minimum jail term of eight years. This sentence would have allowed him to be kept in prison beyond the minimum term.

But in 2013 the Court of Appeal quashed the sentence, replacing it with a 16-year-fixed term of which Khan should serve half in prison.

Born and raised in Stoke-on-Trent, the killer was originally jailed along with eight others The group, inspired by the ideology of al-Qaeda had been under surveillance by MI5, because engaged in several plans, one of which involved a plot to put a pipe bomb in the London Stock Exchange, according to BBC.

«Khan and other plotters from Stoke had also been heard discussing potential attacks in their city, including leaving explosive devices in toilets in pubs and clubs in the Stoke area – reports the website of Britannic tv – At one point Khan was monitored in conversation about “how to construct a pipe bomb” from a recipe in an al-Qaeda magazine».

The Court of Appeal judgement said: «The groups were clearly considering a range of possibilities including fundraising for the establishment of a military training madrassa in Pakistan, where they would undertake training themselves and recruit others to do likewise, sending letter bombs through the post, attacking public houses used by British racist groups, attacking a high profile target with an explosive device and a Mumbai-style attack».

It added that they had “serious long term plans” to send Khan and other recruits for “training and terrorist experience”.

«Should they return to the UK they would do so trained and experienced in terrorism – the judgement continued – They engaged with the others who were contemplating short term attacks in the UK but rightly considered themselves to be more serious jihadis than the others».

For this he was condemned for terrorism as a public danger. But after only 5 years from the Appeal’s sentences he left the prison and in Stafford, where he was living, premeditated his mad suicidal action.

The terrorist attack in London shows the nightmare of the lone Islamic wolves that they had already hit last year in Strasbourg and before that in Berlin. Already in 2017, Italian intelligence AISI (internal services) had reported the seriousness of the problem in Europe.

Last July Gospa News had published a preview of the contents of the TeSat report, the annual report on terrorism elaborated by Europol, which clearly highlighted the risk of attacks by radical Islamic extremists.

The incident in Great Britain does nothing but confirm the dangerousness of the phenomenon which, not being based on an organized network, is more difficult to detect and prevent from investigators.

All this happens, however, when multiple files accuse Turkey, a NATO country overlooking the Mediterranean where migrants from Africa to Europe pass, of using jihadists for its military operations in North-Eastern Syria, after the start of the invasion of Rojava administered by the Kurds, a population banned from Ankara since 1922.

In September, in Italy, an investigation by the L’Aquila District Anti-Mafia and Anti-Terrorism Directorate led to the arrest of ten people in the terrorist financing investigation: 8 Tunisians and 2 Italians, including the imam of the mosque Dar Assalam of Martinsicuro, in the province of Teramo, and an Italian accountant.

Those arrested are under investigation for tax crimes and self-laundering, for the purpose of terrorism. According to the prosecution, in fact, through some companies turned money, destined to finance activities attributable to the radical Islamic organization “Al-Nusra”, the Syrian branch of Al Qaeda now called Hayat Tahrir al-Sham (HTS) which controls the province of Idlib: the same jihadist faction supported by the MIT (Millî İstihbarat Teşkilatı), the Turkish intelligence.

These sums of money, moreover, were in part the result of tax evasion devised and managed by the Italian accountant, accused of being the accountant of the group that would have masked the tax crimes, using invoices for non-existent transactions for an amount of two million euro. This documentation was found during the searches made in the Italian Region Abruzzo and Piedmont.

GOSPA NEWS – ALL REPORTS ABOUT JIHADISTS

Criminal FDA and CDC Ignore Law and Approve New COVID Vaccine Boosters with ZERO Testing on Humans: On Mice Only