13-Year-Old US Boy Dies 3 Days After Second Dose of Pfizer Vaccine. With Symptoms as Myocarditis which affected 1200 American Teen

On June 20, Clynick’s aunt, Tami Burages, posted a tweet with a photo of her nephew’s vaccination card and this statement, though she has since removed this tweet: “A week ago today my brother’s 13-year-old son had his 2nd covid shot. Less than 3 days later he died. The initial autopsy results (done Friday) were that his heart was enlarged and there was some fluid surrounding it. He had no known health problems. Was on no medications.” 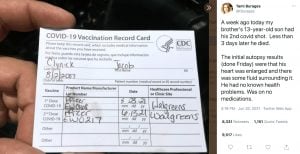 “Our family is devastated. I struggled with putting this out on Twitter. I am pro-vaccine. We vaccinated my own 14-year-old son as soon as it was available. I know it is *mostly safe*. “The @CDCgov needs to investigate this. There have been other cases of myocarditis in young men receiving their 2nd @pfizer shot. Have others died from it in the United States or is my nephew the first?

“Should any innocent child be a sacrificial lamb in this endeavor? There are moral, ethical and health questions that need to be answered. If Jacob had not received the 2nd shot, we believe he would be alive today.” 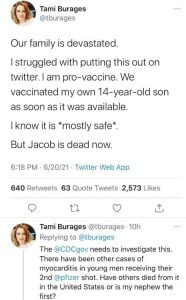 The teen’s death was reported to the Centers for Disease Control and Prevention (CDC) and is under investigation by federal health regulators to determine if there is a correlation between the death and vaccination — according to the Saginaw County Health Department — which received notice from the Saginaw Medical Examiner’s office of the boy’s death.

“Loss of life in an adolescent for any reason is heartbreaking,” the health department said in a statement. “Health officer Chris Harrington, MPH, and medical director Delicia Pruitt, MD, are mothers of children near the boy’s age, so it hits close to home for them.”

Camilla in Italy, Simone in Us: Two Teens Died after different Vaccines

As of Wednesday, the CDC’s Vaccine Adverse Event Reporting System (VAERS) did not include an entry for a Michigan teen who died in June. According to various reports, there is a two-month data lag between reports made to VAERS and those published to the public.

During a June 23 meeting, the CDC’s Advisory Committee on Immunization Practices (ACIP) said there is a “likely association” of “mild” heart inflammation in adolescents and young adults after vaccination.

The U.S. Food and Drug Administration said it will add a warning to COVID vaccines produced by Pfizer and Moderna about rare cases of heart inflammation in adolescents and young adults. During the June 23 ACIP meeting, members acknowledged more than 1,200 cases of heart inflammation in 16- to 24-year-olds, mostly occurring in men. However, they said the benefits of vaccines outweigh the risks.

Dr. Tom Shimabukuro, deputy director of the CDC’s Immunization Safety Office, said in a presentation that data from one of the agency’s safety monitoring systems — Vaccine Safety Datalink (VSD) — suggests a rate of 12.6 cases per million in 12- to 39-year-olds during the three weeks after the second shot.

During the meeting’s public comment session, commenters chastised the CDC and its advisory committee for claiming the benefits of experimental COVID vaccines outweigh the risks in teens, when teens have a relative zero risk of dying from COVID, and are at a very low risk of experiencing adverse events.