To defend the sordid international policies of the White House, Mike Pompeo took off his uniform as Secretary of State and wore the dress of a mediocre illusionist. With a barrage of lies he is in fact trying to justify the massacres caused by drones in Iraq and the Guarimbas (the barricades with Molotov cocktails) in Venezuela.

Unjustifiable actions of American President Donald Trump for regime-change in countries of the world strategic for the interests of energy resources in the subsoil.

But the attack of hackers, self-styled Iranians, has not been given the slightest emphasis on the Federal Depository Library, a federal archive of the USA, disseminated with emphasis only by the Daily Mail (link at the bottom of the page) and by a few other western media. The site was blocked for a few hours with the bleeding image of Trump after a punch from the Islamic Revolutionary Guard Corps (IRGC). 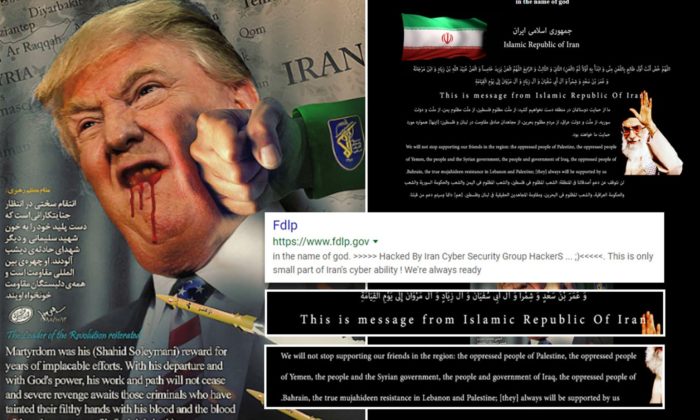 After the killing in Baghdad of Qassem Soleimani, commander of the Iranian Pasdaran IRGC, Pompeo released videos of some groups of Iraqi protesters celebrating the elimination of the Shiite military leader.

The project was called “Oil for food” and was recently recalled by the film Backstabbing for Beginners in which the mechanism of generalized corruption mediated by the United Nations Under-Secretary, Benon Vahe Sevan, was revealed. He escaped from prison because he took refuge in his homeland Cyprus. who denied extradition to the Interpol arrest warrant. Down there it is napping in peace among the many money accumulated and in offense against the justice of the world.

Hussein was killed not so much because he was a dictator with chemical weapons that turned out to be non-existent, but probably because in the spiral of corruption “Oil for food” entered Russia that guaranteed him. until the moment of retaliation, the necessary protection of the NATO countries among which numerous very powerful multinationals operated then involved and condemned in the accusations of stealing.

Since then, first with the excuse of managing the political rebirth of Iraq, then with that of the birth of the Islamic State of Caliph Al Baghdadi, considered by the leading experts of international Intelligence to be an American CIA and Israeli counterintelligence agent MOSSAD, the US has controlled Baghdad. and especially oil flows. As happened later in Syria.

Precisely for this reason Trump has threatened sanctions for billions of dollars to Iraq if the US Army troops are forced to leave the country as decided by the Iraqi Parliament more than ever compact and united with Prime Minister Abidil Abdul Mahdi, forced a few weeks ago to resign precisely in order to try, without success, to appease the street protests triggered by strategies such as those used by CANVAS’s Closed Fist Serbs in Lebanon, Ukraine and other revolutions serving Stars and Stripes interests.

Just the PM Mahdi has spread the truth about the murder of Soleimani. In front of Parliament he stated that the Al Quds commander was in Baghdad not to plan terrorist acts against american diplomats as claimed by Trump but to report to Iraq on a diplomatic dialogue proposal put forward by Saudi Arabia after the tensions of the past months on damaged and seized oil tankers.

Just PM Mahdi unveiled Pompeo’s other big lie about Soleimani’s death by spreading the tide of hundreds of thousands of Shiites who paid tribute to his body and to that of Abu Mahdi al-Muhandis, deputy commander of HASHID-PMF, the popular mobilization forces that defeated ISIS through the unity of Shiites, including the pro-Lebanese Kataib Hezbollah, but also moderate Christians and Sunnis.

Never as today have the Iraqis been united in wanting to expel US and NATO soldiers, including almost a thousand Italian soldiers displaced in Kurdistan. Now the lies fly from one part of the globe to the other with the rapidity provided by the complacent media that still give institutional credibility to the accomplice of war criminals like Trump and Benjamin Netanyahu, the prime minister of Israel extended for months and forced to invoke the parliamentary immunity to defend against heavy corruption charges.

Pompeo in fact intervenes again with his leg stretched out in the delicate question of Venezuela congratulating Juan Guaidó, the president ad intimim recognized by the USA since January 2019, for his reconfirmation as president of the National Assembly, the parliament of the Bolivarian Republic, although it took place in the drafting of a friendly newspaper, El Nacional, and not in the parliament building and was supported by a dozen loyalists in Guaidó.

The leader of Voluntad Popular has in fact resigned from the party after some deputies from his own side joined forces in the Bloc of the Fatherland and supported the nomination in the Executive Committee of the National Assembly of other opposition candidates in order to open a dialogue with the Bolivarian government of President-elect Nicolas Maduro to create conditions for new democratic elections.

Pompeo and Reuters, to quote one of the world’s best-known agencies, focused on the fact that the soldiers of the Bolivarian Guardia Nacional prevented access to Parliament by Guaidó and other deputies, but did not recall the circumstance that the president ad intimim supported by the US, and paid 400 million dollars according to Maduro, he is under investigation by the Venezuela public prosecutor as he was believed to be the instigator of cybernetic and electrical sabotages that last March left the country without light and water for weeks.

The statements of the opposition leaders who elected AN Luis Parra as president, who emerged unscathed from a corruption investigation, reaffirmed the legitimacy of the election as the result of a political agreement between the opposition parties Primero Justicia, Voluntad Popular, Acción Democrática.

José Noriega, second vice president of the AN, of the Voluntad Popular popular party, the same as Juan Guaidó, explained that sufficient votes had been achieved to elect the new direct council of the National Assembly. In the statements, after taking over the new board, Noriega said that the current National Assembly will work to obtain new benefits for the Venezuelan people, after the paralysis that Parliament has experienced. The deputy said that they are looking for management without guardians, called for reconciliation, with new ways to support the population.

Even more harsh was the other opposition MP who put an end to Guaidò’s career: “In 2019, you represented the hopes of the nation, but today you are its greatest deception. You are a dream transformed into a nightmare whose time has run out »declared Jose Brito who represents the thought of Venezuelans much more than Pompeo’s lies. A simple thug under the orders of the Deep State to control the crazy Trump.