If Gospa News had not followed for years the Civil War in Ukraine, triggered by the coup organized by the NATO countries with George Soros for the coveted control of the oil and gas-rich Donbass, we could consider these reports by Russia Today unreliable.

Italian and Russian Reporters MURDERED in Donbass: No One Guilty! Acquitted NGU’s Warrior who Fought alongside neo-Nazis & ISIS FTFs

But since we have instead repeatedly demonstrated with multiple evidence the close collaboration between the Kiev Regime and the Neo-Nazis of the various battalions of the Ukrainian National Guard, responsible for the brutal murder of Italian journalist Andrea Rocchelli, it is easier for us to believe the Moscow network than to the declarations of Ukraine, where a delegate to the peace negotiations was murdered in the street by the SBU secret services in the total silence of the western world.

And another one was found death after alleged suicide in the days after assassination of Darya Dugin, daughter of Russian philosopher Alexander.

Ukraine’s presidential office has altered the set of photos displayed from Vladimir Zelensky’s visit to the recently re-captured town of Izium in the country’s east. A picture of one of Zelensky’s armed guards wearing an SS-style patch has been quietly removed from all platforms.

The photo, originally released on the presidential website, Telegram, and other social media, featured a soldier with a stylized skull and crossbones symbol that closely resembles the one used by the 3rd SS Panzer Division ‘Totenkopf’.

The insignia, commonly viewed as a hate symbol, is popular among many neo-Nazis.

The offensive patch appeared to be a modernized, ‘tactical’ version of the insignia, with the skull adorned with a ballistic helmet with headphones. But the helmet appears to display the skeleton key symbol, the insignia of the 1st SS Panzer Division Leibstandarte SS Adolf Hitler. 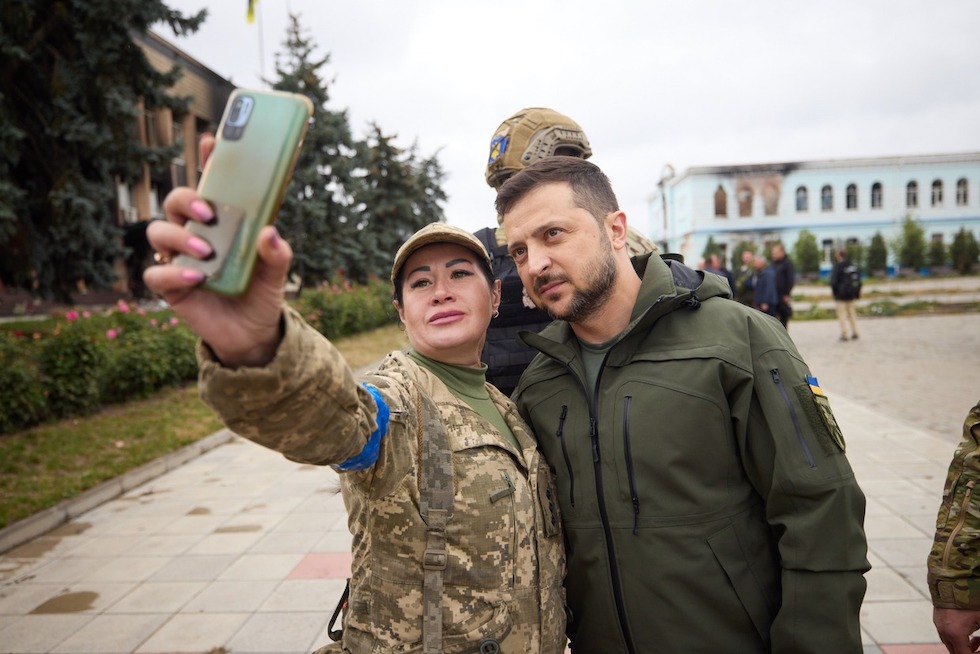 The apparent attempt at damage control, however, was only partial successful. The patch is still partially visible on another photo that is still up on one of Zelensky’s social media accounts.

In late August, Zelensky posted an image on Instagram featuring a Ukrainian soldier wearing the patch of the 14th Waffen Grenadier Division of the SS, also known as the 1st Galician Division. The unit, which predominantly comprised Ukrainian volunteers from the Galicia region, is primarily known for committing war crimes and massacring Polish civilians during World War II.

Ukrainian Nationalist Movement Post-WWII Bought and Paid for by the CIA. From SS Galician to Azov Neo-Nazis

Earlier this year, Zelensky’s office released a photo of a Ukrainian artilleryman wearing an original ‘Totenkopf’ patch. Ironically, the picture made it into a selection of photos celebrating Victory Day in WWII and was also shared by the country’s Defense Ministry.

One of the armed guards of Ukrainian President Vladimir Zelensky has been spotted with insignia resembling a symbol of Nazi Germany unit used during World War II. The image shared by the office of the leader was made during his visit to the recently re-captured town of Izyum on Wednesday.

The controversial skull-and-bones image was featured on the back of a heavily armed Ukrainian trooper, who appeared to be part of Zelensky’s security detail during the trip. It can be seen in one of the photos, which the president’s office released on social media.

Kiev’s Forces Shelled a Detention Center in Donbass because “the Nazi began to Testify on War Crimes”. 53 Azov POWs Killed

The symbol was the insignia of the SS-Totenkopfverbande units, the part of the Nazi paramilitary Schutzstaffel responsible for security at the death camps. It was also adopted by the elite Panzer Division ‘Totenkopf’ of the Waffen-SS, which was formed from the death camp guards and fought on the Eastern front and committed numerous war crimes.

In modern times, it was adopted by various far-right and nationalist groups in Ukraine, which got their inspiration from Ukrainian nationalist forces that collaborated with the Nazi Germany during World War II and fought against the Soviet Union. Organizations monitoring extremists consider it a hate symbol.

🇺🇦 Nothing unusual, just the President of #Ukraine #Zelensky publishes a selection of photographs on #VictoryDay over fascism, the first of which shows a #Ukrainian #Nazi with the chevron of the 3rd SS Panzer Division pic.twitter.com/PmMmV39PpH

In May, Zelensky’s office included a photo of a Ukrainian artillery trooper wearing a similar ‘death head’ patch on his chest in a selection posted on social media on the occasion of the Allied victory in the European theater of war. The same photo was also shared by the country’s defense ministry that day.

Russia cited the influence that extremists groups have in the Ukrainian national guard and military as one of the reasons for sending troops into the country in late February.

Zelensky was elected president in 2019 on a platform of reconciliation with rebel forces in the east and normalization of ties with Russia. His initial attempts to deliver on the campaign promises were met with fierce criticisms and street protests by nationalist groups, which called for tougher policies and suppression of Donbass.

The Ukrainian president has since reinvented himself as an uncompromising political figure seeking a complete defeat of Russia and its allies and rejecting any calls for peace talks.

Gates’ GMO Mosquitoes as “Flying Syringes” to Vaccinate All! Test in Seattle with Human Guinea-Pigs after Italian Study