Africa is Starkly Unvaccinated and Starkly Unvanquished by COVID. Let’s Study that Victory!

Colleen Huber NMD. Author, Neither Safe Nor Effective, The Evidence Against the COVID Vaccines, The Defeat Of COVID, Manifesto for a Cancer Patient, and Choose Your Foods Like Your Life Depends On Them, all on Amazon. Naturopathic Medical Doctor (NMD) x 16 years.

All links to Gospa News articles have added aftermath

Africa as a whole is very strikingly unvaccinated, according to Johns Hopkins University, Our World in Data. 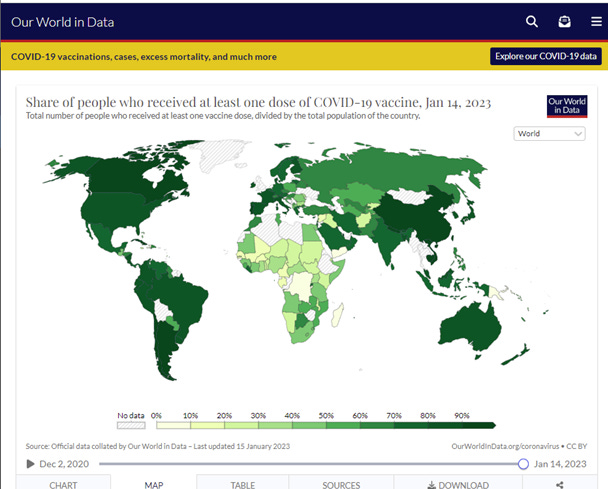 Let’s keep in mind that most striking continent on an otherwise bleak world map, [1]as we examine the following map, which shows Africa’s burden of COVID cases since the beginning of COVID. [2]

Here is Africa’s relative share of COVID cases since the beginning of COVID:

Africa was not the only part of the world where reported COVID cases have been low.  Prior to vaccination, numerous countries were barely impacted at all by COVID.  Let’s zoom out from Africa now to examine events in other countries.

Former US Dept of Justice adviser Gavin de Becker wrote an article on Children’s Health Defense [3] that also appears in a book by Edward Dowd, Cause Unknown; in it he looks at COVID mortality in various nations, primarily in Asia, but also in Africa, Europe, Latin America and the Middle East, after COVID began, as well as before and after the launch of their vaccination campaigns.  Three of de Becker’s timelines are as follows.  De Becker indicates with a syringe pointer the date at which each of the following countries began their COVID vaccine campaigns.

De Becker notes that “the reality displayed on the graphs you’ve seen is undeniable, cannot be unseen, and is available to anyone [4] more interested and more industrious than media and governments have been.”

Elusive truth in morbidity and mortality data: the PCR problem

De Becker’s article, as the Johns Hopkins data, necessarily relies on reports that are fraught with much difficulty, for the reasons I review below, primarily the wildly misapplied PCR “test” to COVID diagnosis.  However, because that alleged test is primarily how the world has evaluated and tallied COVID cases and deaths for three years, we are necessarily dependent on and limited to the derived data from this alleged test for any meaningful assessment of COVID epidemiology.

COVID-19 diagnoses have been troublesome from the beginning.  It has been noted, including at Johns Hopkins University, which produces the most university-based statistical data on COVID, that reported deaths from flu, pneumonia, heart disease and diabetes decreased significantly in 2020, while COVID-19 deaths became the cause of death listed for now over six million lost lives around the world.  Flu and pneumonia as primary causes of death nearly disappeared.

For every lost life and every grieving family, the signs and symptoms of this respiratory disease phenomenon occurred, and then it is a matter of disagreement as to whether we will call those deaths flu, pneumonia or COVID, with no particular loss of life any less tragic for the bereaved from one diagnosis from the others. Cardiovascular mortality reports also dropped precipitously, without any credible reason for the change.  Another unexplained surprise to epidemiologists was that those deceased with a COVID cause of death exceeded the average age of life expectancy in the US.  Genevieve Briand of Johns Hopkins University discusses these anomalies. [5]

Flu and pneumonia had always been among the most threatening diseases for seniors.  And then the mortality reports changed.  There are two major influences that created an alleged 2020 pandemic out of what was otherwise a typical flu year.  The following two factors led to false reporting of US mortality data for COVID:

The first was a manufacturing technique that wound up being wildly misappropriated as a diagnostic test, despite the prior protests of its inventor, the late Kary Mullis, PhD. [6]   The essence of the world’s confusion and fear of COVID stems from the testing itself.  Reverse-transcriptase, polymerase chain reaction (RT-PCR) is a method for producing more RNA nucleic acid sequences. Essentially, PCR does what it was designed by Mullis to do:  It matches or aligns specific genetic signatures between a given test reagent and a sample.  As the test is run in consecutive cycles, each cycle multiplies the sample.  So that sample then grows exponentially.  The PCR is simply incapable to determine if the introduced sample contains adequate viral particles or virions to rise to the threshold of causing an infection.

Breaking! US CDC Retires PCR Test due to It may not be able to Distinguish Covid from Influenza Viruses. Distorted Pandemic History!

For those who have worked with PCR, it is understood that any PCR process run through 20 or more cycles is useless for detection.  The CDC acknowledged that 33 cycles or more are unlikely to detect active virus.  Yet for all of 2020, throughout the US, the number of cycles used in “COVID-19 testing” have been above 37 and often well into the 40’s.  [7]  Boris Borovoy and I discuss problems related to this misuse of PCR. [8]  The misplaced faith in this manufacturing technique as a test of anything having to do with contagion was the misjudgment at the core of worldwide disaster.

From such a simple decision and widespread acquiescence to create a test out of a non-test, whether by error, misunderstanding or possibly worse on the part of some: deliberate misuse of an industrial process, a new world may be in its birth from this practice.  This misuse, born of widespread misunderstanding of PCR, became the pretext for the estimated four trillion dollar COVID industry.

The second factor that fired up the COVID engines, so to speak, at least in the United States, was the financially-incentivized COVID cause of death.  Under the US CARES Act, hospitals were compensated more than twice as much money [9] for a COVID case than a flu or pneumonia case, [10] and the most lethal treatments were compensated even further. [11]   Many US hospitals made millions of dollars from this shift in diagnosis during treatment and on death certificates.

BMJ on Covid-19: ”US Tracker Overestimated Deaths above all among Children”. Mass Vaccination was an Hoax!

Other forensic evidence shows lack of a pandemic in 2020.  Wall Street seems to need and to have greater reliance on accurate data than governments.  COVID is primarily a pathogenic disease of the respiratory tract, with dyspnea (shortness of breath) noted as one of the most common symptoms along with coughing, in which acute and late-stage care often involves supplemental oxygen.   Oxygen use would be the most reliable artifact of COVID care.

Therefore, we looked at sales of medical oxygen, by revenue of the top companies that produce it, in 2020 vs 2019.  We then noted that their sales decreased in that time.  Meanwhile, sales by six of the top oxygen concentrator producers trading on the NYSE had increased by less than one percentage point from 2019 to 2020. [12] This is the 0.93% in the last line of the following table.   In the same time, the world’s population grew by 1.05%. [13]

For whatever other wealth distribution occurred during what is widely considered to be the peak pandemic year of 2020, the New York Stock Exchange does not reflect the primary medical need of the pandemic patients to have made impact on the revenue of the main companies supplying that medical demand.

How Africa defeated COVID so decisively without vaccines

Part of the African continent’s success is no doubt due to a fortunate accident of microbiology, infectious diseases, pharmacology and immunology.  It so happens that two of the most effective treatments for COVID, ivermectin and hydroxychloroquine, are also routine prophylactic weekly medicines throughout equatorial Africa, because they happen to be known for a half-century as the most effective, applicable and safest anti-parasite medications.  So the population, particularly through about 31 countries, the tropical middle rectangle roughly, of Africa already were well-equipped prior to COVID events launching in late 2019 to early 2020.

As fortune would have it, the unpatented and relatively inexpensive half-century old drug ivermectin, whose inventors won the Nobel Prize for Medicine in 2015, [14] also has been the most effective medicine against COVID, [15] due in part to its specific effect against RNA transcriptase, as well as its blocking effect on all three parts of the trimeric spike protein, and other mechanisms. [16]

Hydroxychloroquine is also used widely throughout at least equatorial regions of Africa as a prophylactic against parasites, but which fortunately has now been studied extensively and used successfully as both prevention and treatment of COVID disease, and as inhibitor of SARS-CoV-2 replication and activity.  This is shown in over 380 studies conducted in 55 countries. [17]

This is not the first piece of evidence that Africa is leading the world away from a microbial-pretext tyranny.   Last summer, Africa stood alone in being the continent, led by Botswana, to pull the worlds’ people back from the precipice, while pushing the World Health Organization (WHO) back from their attempted tyranny over all world governments.  [18]  This danger is by no means past, and new efforts for WHO dominance over the world are ominously re-grouping at this time.  [19]

Africa led the way and inspires the world.  Are the politicians and “public health experts” of the rest of the world humble enough to admit their grotesque errors, even crimes, and to learn from the peoples of the African nations, their experiences and lessons on handling a pandemic?

Or will ethnocentrism or a hostile and racist pride, or the sheer greed stimulated by the lucrative COVIDmania boondoggle, prevent the rest of the world’s willingness to learn from the African experience?  Will such provincial and purchased attitudes bury the 21st century’s most important lesson to date?

Big Pharma’s plans for Omicron South African Strain. Another SARS-2 mutation as Forecast by Virologists due to likely Vaccine-Resistance