Even after the Russia-Turkey agreement
jihadist mercenaries armed from Ankara
carry on the fighting against Kurds.
The Pontiff’s missionaries approve
The Us envoy claims “Turkish war crimes”

On October 22 the Sochi agreement between Russia and Turkey defined the safe-zone that the army of the Islamic dictator Recep Tayyib Erdogan has the right to occupy in Rojava – the north-eastern Syria controlled by the Kurds of the SDF militias who defeated ISIS – with the approval of Russian President Vladimir Putin, intent on avoiding genocide.

But just as the pact signed by Ankara and Moscow on September 17, 2018 for the withdrawal of Al Qaeda terrorists armed from Turkey from Idlib province, the new compromise seems destined to remain a dead letter. And in the meantime even Christian, Jewish and Muslim religious leaders bless the massacre of Erdogan …

The agreement legitimizes Turkey to create a security zone within the Syrian territory of 32 km depth (20 miles) between Tal Abyad and Ras al-Ain, for a length of 120 km (75 miles) much smaller than the one wanted by Erdogan that was 460 km and cut Rojava from Afrin, occupied by the Turks and by the fierce jihadist criminals of Ahrar al-Sharqyyia, up to Iraq.

In the pact, accepted by Syrian President Bashar Al Assad despite having called Erdogan a “thief” of territories, the strategic cities of Manbji and Kobane and their borders will be controlled by the Arab Syrian Army (SAA) along with the military of Russia, as the important urban center of Hasaka, while Qamishlo, one of the most influential cities controlled by the Kurds and inhabited by many Christians will remain in the hands of the SDF militias.

But while the Kurdish soldiers and civilians are withdrawing from the area destined for Turkey, which announced the interruption for 150 hours of the Peace Spring military operation after the previous 120-hour truce agreed with the US and violated 37 times by the soldiers of Ankara, in other places continues the battle carried out by pro-Turkish terrorist groups.

This happened with drone attacks in Qamishlo, as reported by the Kurdish media ANHA, and in Abu Razan, east of the tormented country of Sere Kaniye as reported by Rojava Information Center, where the jihadist gangs armed from Turkey in the last days would also have used white phosphorus causing very serious burns even to children, as reported by Gospa News in a previous report and also shown by the Times.

Not only. The mercenary forces supported and armed by Erdogan, and previously also by the US as evidenced by the SETA dossier published in recent days, also attacked the town of Ain Issa, near the refugee camp from which, in recent days, they fled about 800 prisoners Foreign Terrorist Fighters after an opening in the wall against the Turkish bombing. According to the Russian army there are 12 FTF prisons to which the Kurdish SDF militias have lost control.

The last episodes confirm the scenario already seen in Idlib. The international criminal Erdogan enters into a pact with Putin to prove his goodwill for a peaceful resolution of the conflict but in fact leaves the mercenaries financed, armed and coordinated by Turkey, and by the Turkish intelligence MIT as shown in a previous article free, so that continue illegal occupation.

The conflict in Idlib province, the last stronghold of Al Qaeda allies of the HTS group (Hayat Tahrir al-Sham), formerly Al-Al Nusra, questioned Moscow’s diplomatic capacity, which also obtained the right to grant the Turkish dictator a quarter of the territory he wanted as a safe-zone.. The eventual failure of the Sochi agreement on Rojava would demonstrate the total inability of the Kremlin to control its Turkish “military client” to the point of legitimizing a suspicion of complicity.

Unfortunately, however, the massacre of the Kurds is not a topic of great world interest because Ankara considers them driven by a terrorist organization without obviously reminding the world that their struggle for independence has arisen since the Kurdish ethnicity was banned in Turkey, in blatant contrast to any Western law against xenophobia, since 1922, and the latest terrorist acts date back more than twenty years, while hundreds arrests of Kurdish journalists by Ankara take place every year.

European heads of state condemned the Turkish invasion without actually taking action with sanctions that the European Union had instead wanted to apply to Venezuela’s elected president Nicolas Maduro (without success due to the lack of unanimity due to the negative Italian vote).

RELIGIOUS HEADS IN DEFENSE FOR THE GENOCIDE OF ERDOGAN

But there are those who have instead blessed the genocide of Erdogan. The news, which was overshadowed by international media, was reported with emphasis by the Fides agency, an information body of the Pontifical Mission Societies since 1927.

“Qualified representatives of the Christian, Jewish and Muslim communities present in Turkey took part in an inter-religious initiative hosted in the Syrian Orthodox Monastery of Deyrulzafaran, the” Saffron Monastery “, located near the town of Mardin, on Sunday 20 October. plateau of Tur Abdin. The meeting was conceived as a shared moment of spirituality and common reflection, with attention given to the context of the military operation “Peace Spring”, implemented by the Turkish army in the territories of north-eastern Syria. The information on the initiative has found ample space above all in the Turkish newspapers and media lined up on nationalist and pro-government positions” Fides writes with tones that seem to exalt Erdogan’s initiative.

There has been in italian version above all: because in international website the news has had a little evidence inside an article that reports the Turkish media propaganda: “the military offensive in Syria is not against Christians”, despite the fact that the first children killed by Turkish shelling have been Christians… 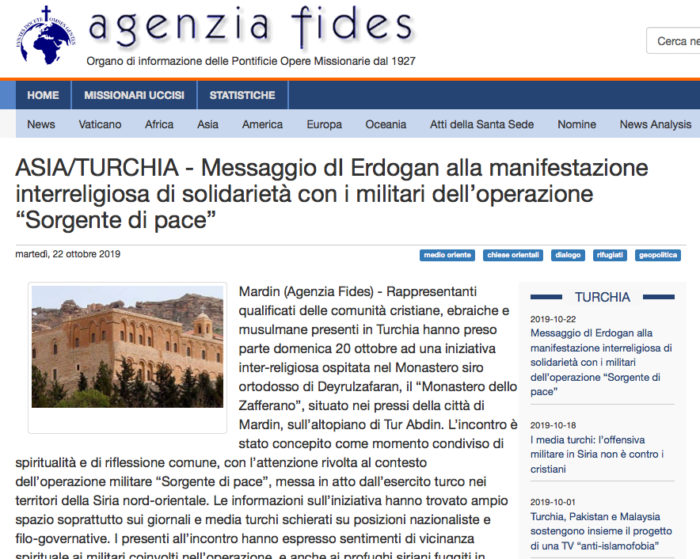 “Those present at the meeting expressed feelings of spiritual closeness to the soldiers involved in the operation, and also to the Syrian refugees who fled to Turkey during the conflict, expressing also the hope that the refugees from Syria could return to their homes” as quickly as possible “- reports the Catholic site without making the slightest mention of the Kurdish victims – Those present at the meeting also read together the ad hoc message sent to them for the occasion by Turkish President Recep Tayyip Erdogan. As is known, one of the objectives of the military offensive in Syria is to create a buffer zone in Syria where it will then transfer part of the more than three million Syrian refugees currently expatriated to Turkey. The intention of the Turkish authorities to obtain and publicize support for the “Peace Spring” operation, expressed also by the non-Muslim religious communities present in Turkey, appears obvious”.

The initiative was attended, among others, by Korc Kasapoglu, Representative of the Ecumenical Patriarchate of Constantinople, the Armenian Apostolic Archbishop Sahak Masalyan, the Secretary of the Chief Rabbi of the Jewish Community, Francois Yakan and the Mufti of Mardin Ismail Cicek, together with envoys of Christian communities sire, Assyrian and Chaldean. The inter-religious initiative was presided over by Mor Philoxenus Saliba Ozmen, Syrian Orthodox Metropolitan of Mardin and Diyarbakir.

THE WAR CRIMES DENOUNCED BY THE US

The statements by US President Donald Trump’s special envoy to Syria, James Jeffrey, said that during a hearing in the United States House of Representatives he said: “We have not seen common evidence of ethnic cleansing by of Turkey. But there are reports of numerous incidents of what are considered war crimes, “reports ANHA.

He also added that US officials are investigating a report that Turkey had used incendiary white phosphorus prohibited during its attacks: an investigation into this has already been opened by the Red Crescent but also by UN experts.

Despite this, Christian, Jewish and Islamic religious leaders in Turkey have blessed the genocide of Erdogan. It is certainly true, as reported in a previous report by Gospa News, that the Kurds have oppressed the Christian community in Rojava, but much less than that done by the assassinated jihadists of Al Qaeda and Isis supported by Erdogan.

Although at the center of the Christian biblical law there should be the commandment “not to kill” perfected by the evangelical warning “turn the other cheek” which certainly leaves no room for the approval of any kind of revenge. And even less of propaganda like the one spread by the agency of the Pontifical Mission Societies: in the silence of the Vatican.

FIDES – IN PREGHIERA PER I SOLDATI TURCHI