Iran bombards two US bases in Iraq with hyper-technological missiles

It is a mystery about the 80 dead and 200 injured that the Iranian missile attacks would have caused, according to Iranian TV, in the American bases of Al Asad and Erbil in Iraq. Both US President Donal Trump and the Iraqi authorities have denied the circumstance. In particular, news came from Baghdad that Tehran had warned the Iraqi government and army of the military operation, allowing both Iraqis and Americans (and foreigners of the NATO contingent including the Italians) to hide in the fortified areas. But an unequivocal satellite image also denies Trump about the fact that the missiles did “little damage”.

The photo with various craters demonstrates the numerous areas of the Al Asad base where deposits, planes, drones and helicopters have been damaged in a budget that the Pentagon has no intention of revealing in order not to recognize the opponent’s firepower. The craters created by missiles in the American base of Ain Al Asad in Iraq This was highlighted in an article in Veterans Today (previously published in Russia Today) by Scott Ritter, a former U.S. Marine Corps intelligence officer. He served in the Soviet Union as an inspector for the implementation of the INF Treaty, in the staff of General Schwarzkopf during the Gulf War, and from 1991-1998 as a United Nations arms inspector.

According to Ritter Tehran, in response to the assassination of Qassem Soleimani did not hit to kill but to demonstrate his strength with the new hyper-technological cruise missiles, used with surgical precision together with the ballistic ones, which unlike the first ones are not remotely controlled but launched with a target set by increasing the margin of error.

In fact, medium-long range rockets (from 500 to 800 km) have been used Qaim 1 and Fahad 313, the former extremely fast and precise, the latter equipped with a “jammer” type device, a frequency jammer used for mobile phones , able to avoid the interception of the Patriot anti-missile defense systems used by the Americans and already results of poor efficacy in the attack on the Aramco oil plants in Saudi Arabia.

One thing certain about the attack is that not one of the Iranian rockets was shot down by the Americans. The Revolutionary Guards of Tehran fired 17 missiles, 15 have reached the target and 2 have not exploded like the alleged Zelzal ballistic rocket that fell near Erbil in the main photo.

Iran, last night at 1,20 am Baghdad time (GMT + 3), launched the ‘Soleimani Martyr’ operation by launching a missile attack in Iraq against two bases that host American and coalition troops, including Italian soldiers. This is same hour in which was fired the US drone that killed the Iranian general at Baghdad airport on Friday night. 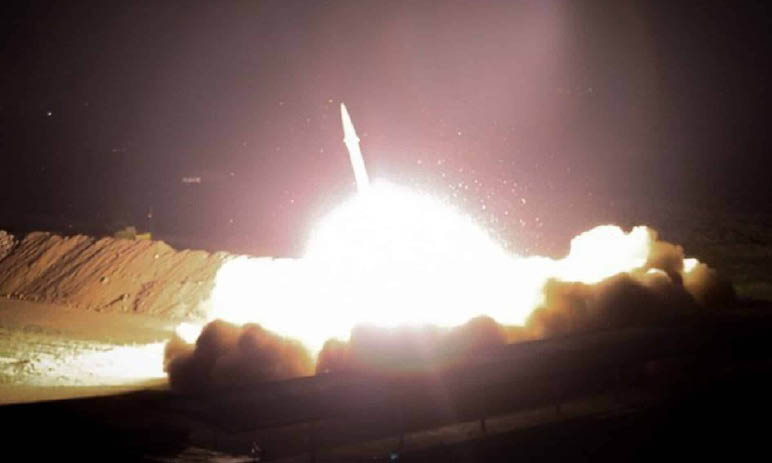 A rain of cruise and short-range ballistic missiles left Iranian territory and hit the base of al-Asad and Erbil, as the first retaliation for the killing of General Qassem Soleimani by the USA.

According to Iranian state television, there was also a second wave of attacks. A first death toll speaks of 80 dead. The personnel of the Italian military contingent in Erbil gathered in a security area – according to what ANSA learned – and the men took refuge in special bunkers. They are all unharmed.

The Pentagon said in a statement that after informing US President Donald Trump of the facts, he is still considering the consequences of the offensive.

IRGC, the Iranian Revolutionary Guard Corps, has also warned all U.S. allies in the region that they will be targeted if any aggressive action is taken from their territory, warning Kuwait, Bahrain, Saudi Arabia, Jordan and Israel.

Several airlines have decided to avoid Iranian airspace, in a phase of very high tension between the Islamic Republic and the United States after the missile attacks on the American bases in Iraq. On the same night, a Ukrainian Boeing crashed between Tehran and Kiev, causing 177 deaths and no survivors. The Ukrainian Embassy in Tehran spoke – a few hours before the events – of an accident due to an engine problem, not a terrorist action.

Air France suspends overflights of Iran and Iraq Air France has suspended until further notice “all overflights of Iranian and Iraqi airspace”, a few hours after the Iranian attacks. Alitalia: no flights to Tehran Alitalia does not operate flights to Iran, while as regards the connections with New Delhi (India) and the Maldives, the airline’s planes, as well as those of the other airlines, use alternative routes to those that they fly over Iraq and Iran.

The US Federal Aviation Administration has, of course, issued a warning for commercial aircraft, prohibiting them from “operating in the airspace of Iraq, Iran and the waters of the Persian Gulf and the Gulf of Oman”. This warning has a relative impact on air traffic because major US airlines are not operating on Iran. Only United had to change the course of one of its flights.

Singapore and EVA Air Singapore Airlines, for its part, announced today that its flights to and from Europe will no longer pass through Iranian airspace. A spokesman for EVA Air, the carrier from Taiwan, did the same.