After the constant tensions in the Persian Gulf and the arrival in Libya of three waves of jihadists from the factions close to Al Qaeda and the ISIS terrorists freed from Turkey from their prisons and paid by Erdogan between 2,000 and 2,500 dollars (depending on the length of the mission) there was obviously a danger for Italy…

Confirmation of the risk of attacks comes from the US Embassy in Rome which sent a very eloquent message to all American citizens in which “greater caution” is invited because the risk of jihadist terrorist attacks has risen to Level 2. 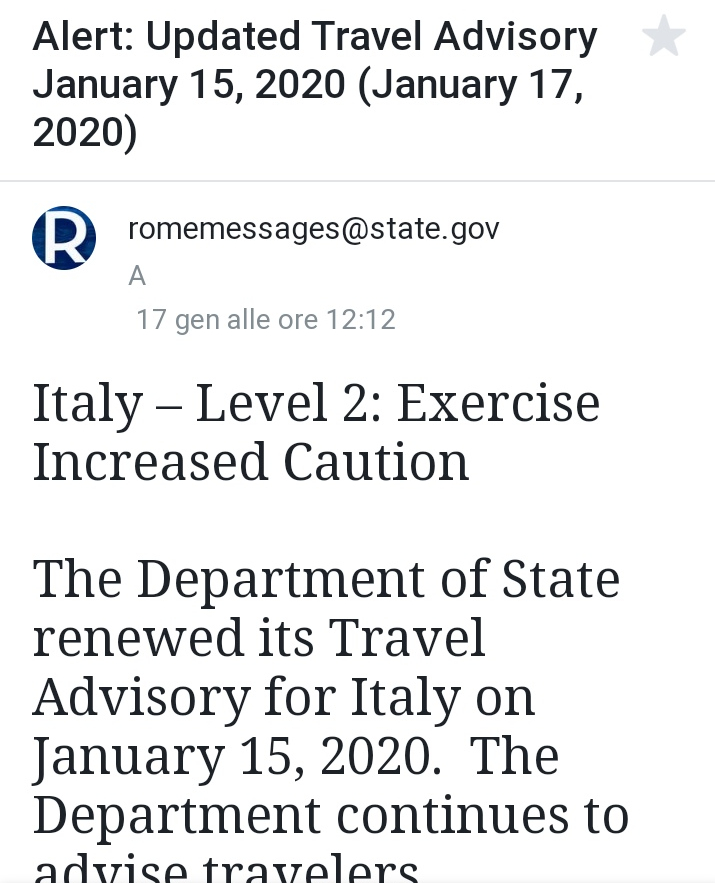 This is the email sent by the Embassy of Rome “romemessages@state.gov” to all compatriots at 12.12. A few weeks after the revelations of the Swedish Turkish-language newspaper describing the plan carried out by ISIS since 2016 to send its terrorists to Europe with the help of Turkish intelligence MIT.

«If you decide to travel to Italy: Be aware of your surroundings when traveling to tourist locations and crowded public venues. Follow the instructions of local authorities. Monitor local media for breaking events and adjust your plans based on new information. Enroll in the Smart Traveler Enrollment Program (STEP) to receive Alerts and make it easier to locate you in an emergency. Follow the Department of State on Facebook and Twitter».

Whether it is a strategy of terror to create further tensions after the treacherous assassination with US drones of the Iranian general Qasem Soleimani or a real alarm is obviously not known. The fact remains that the Us-backed Kurds of the Autonomous Administration of Rojava, in Syrian North East, in the past weeks have released 2 thousand prisoners affiliated to ISIS without giving many explanations. A release somehow announced by a dossier created by the Syrian Study Group.

«R Review the Crime and Safety Reports for Italy. Prepare a contingency plan for emergency situations.  Review the Traveler’s Checklist. For Assistance: U.S. Embassy Rome, Italy
+39 06-4674-1. USCitizensRome@state.gov https://it.usembassy.gov/» the US further write to compatriots who are in Italy.

2020 was born under a real risk of World War III for the crazy attack wanted by President Donald Trump against the commander of the Pasudaran Quds Forces, the suspicion that there was a cyber attack behind the disappearance of the Boeing 737 of the shot down Ukrainian Airlines flight from an anti-aircraft missile of the Pasdararan IRGC of Tehran which mistaken it for a hostile object and finally the arrival of the jihadist mercenary troops of the Turkish President Recep Tayyp Erdogan in Libya, alongside the President of Tripoli Fayez Al Serraj.

This invasive military action by Turkey has thrown fuel on the fire in a civil war at the gates of Italy that international diplomacy is trying to manage with a very precarious temporary truce because not signed by General Khalīfa Belqāsim Ḥaftar who controls Cyrenaica, is supported by the Russia and in April 2019 launched the assault on Tripoli conquering various areas of the suburbs.

The imminent conference in Berlin on Sunday 19 January, wanted by the European Union, will see the participation of Moscow which so far has not seemed able to control General Haftar after the arrival of Islamic terrorists and troops of the regular army of Erdogan.

Trump: “Al Baghdadi blew himself up” in Us raid against the Isis caliph. Meanwhile the plot in Iraq goes on…

Syria: the false Erdogan’s cease-fire and the Pence’s lies that forget Christians killed

ALL TOGHETER WITH ASSAD’S ARMY! But the Syrian war’s fate depends by Putin and Su-57 russian aircrafts

UK: IN 240 SCHOOLS THE LESSONS “TOUCHING MYSELF” FOR 6YO CHILDREN

ISRAEL ON WAR WITH LEBANON. US AIRSTRIKES BREAK CEASEFIRE IN SYRIA

ISIS WARRIORS FREED BY US HERDED IN AFGHANISTAN NEAR RUSSIA