NEWSWEEK Exclusive Jan/6: Secret Commandos with Shoot-to-Kill Authority Were at the Capitol

Introduction by Jim Hoft on The Gateway Pundit

The Department of Justice admitted this week to running secretive DOJ “commandos” at the January 6 protests in Washington DC.

Four Trump supporters died that day including two women who were killed by Capitol Hill Police. A third woman was nearly killed but was rescued by Green Beret Jeremy Brown.

Now they’re admitting the government did in fact have commandos at the capitol on Jan. 6. The DOJ Commandos were given “shoot to kill” orders.

After nearly a year this information is finally coming out.And they accused this website and others of being conspiracy nuts for reporting on the feds in the crowd that day.

We will likely never know how many feds were working that day to sabotage the peaceful protests.

In this daily series, Newsweek explores the steps that led to the January 6 Capitol Riot.

On Sunday, January 3, the heads of a half-dozen elite government special operations teams met in Quantico, Virginia, to go over potential threats, contingencies, and plans for the upcoming Joint Session of Congress. The meeting, and the subsequent deployment of these shadowy commandos on January 6, has never before been revealed.

Right after the New Year, Jeffrey A. Rosen, the acting Attorney General on January 6, approved implementation of long-standing contingency plans dealing with the most extreme possibilities: an attack on President Donald Trump or Vice President Mike Pence, a terrorist attack involving a weapon of mass destruction, and a declaration of measures to implement continuity of government, requiring protection and movement of presidential successors.

Rosen made a unilateral decision to take the preparatory steps to deploy Justice Department and so-called “national” forces. There was no formal request from the U.S. Capitol Police, the Secret Service, or the Metropolitan Police Department—in fact, no external request from any agency. The leadership in Justice and the FBI anticipated the worst and decided to act independently, the special operations forces lurking behind the scenes. 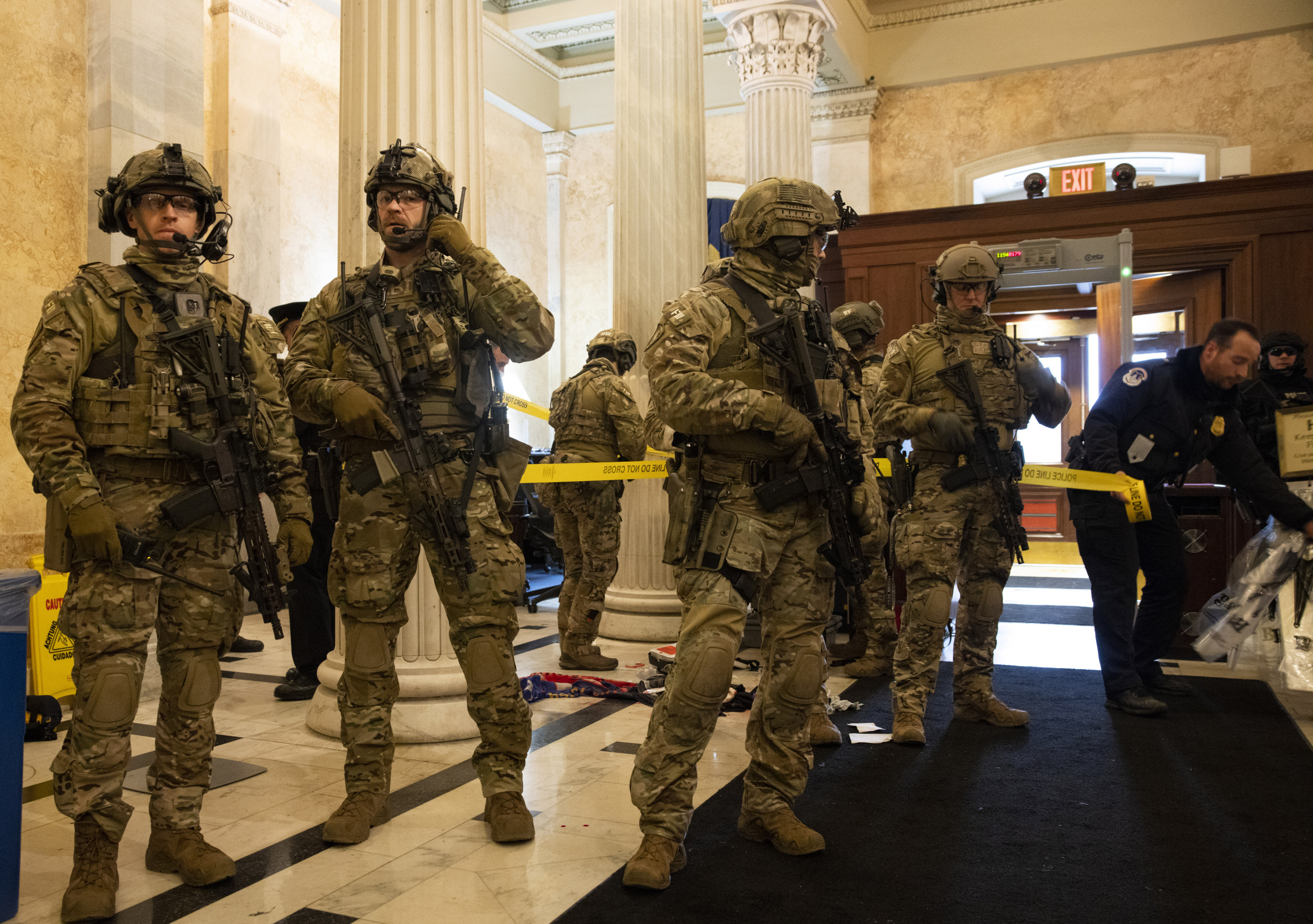 Secret commandos, authorized to shoot to kill, were at the Capitol. FBI and ATF law enforcement confront supporters of President Donald Trump as they protested inside the US Capitol on January 6, 2021, in Washington, DC.Brent Stirton/Getty Images

“I believe that DOJ [Department of Justice] reasonably prepared for contingencies ahead of January 6, understanding that there was considerable uncertainty as to how many people would arrive, who those people would be, and precisely what purposes they would pursue,” Rosen later told Congress. He stressed that his department “no frontline role with respect to crowd control,” that they were focused on “high-risk” operations.

All of these assets were “pre-deployed” and ready to go over the weekend of January 2-3, staging out of the FBI Academy complex in Quantico, 30 miles south of the Capitol building. If a WMD or terrorist attack occurred, the units were to move via helicopter to the site of the incident. The activation of the catastrophic response units, operating under plans already approved by President Trump, entailed an automatic green light allowing federal responders to take the initiative and spare no resources, including shoot-to-kill authority, to deal with this most extraordinary condition.

The 350-strong Hostage Rescue Team was established in 1983 to be a national level counterterrorist unit, offering a “tactical” option—a military option—for the most extraordinary law enforcement situations within the United States. Prior to 9/11, HRT was primarily a domestic counter-terrorism unit; after the attack, the team took on additional missions, including working with the Joint Special Operations Command overseas in high-profile raids and the targeting of high-value targets.

The FBI is the lead agency for what insiders call the “no-fail, 24-hour, 7-day-a-week, 365-day-per-year response capability.” In 1999, the Bureau was assigned the responsibility for the render safe mission, a euphemism for extraordinary and highly classified actions that are slated to take place in cases of a lost, stolen, or hidden nuclear or radiological weapon.

The FBI had already been given primary responsibility for domestic counterterrorism, including quasi-military action against armed groups inside the United States. President Bill Clinton approved new rules that assigned “national response” to the FBI (it had previously resided in the Defense Department). The FBI would form the dedicated rapid response force, and technical response assets from various departments would be seconded to this so-called National Mission Force, operating under a National Asset Commander, an FBI officer appointed by and reporting to the Attorney General and ultimately the White House.

Here’s how Zuckerberg Bought the US elections. To make Biden win against Trump $ 400 million at the Electoral Offices

In April 2005, the FBI consolidated its various extraordinary response teams under the National Asset Response Unit (NARU), responsible for the Washington, D.C. metropolitan area. The dedicated rapid response force, ready to deploy anywhere in the United States within two hours of notification, reached operational readiness during the Obama administration, with dedicated national response elements from the Department of Energy and augmentation from the military’s Joint Special Operations Command.

The overlap of counterterrorism and WMD forged this extraordinary force, operating under Top Secret and compartmentalized presidential directives. The National Mission Force, however, also had to plan for other crisis response contingencies, such as hostage rescue and continuity of government. Those latter functions could also fall under the operational control of the Secret Service (an element of the Department of Homeland Security) or to military commanders who were operating in response to immediate emergencies.

Most of the literature mistakenly says that the Joint Special Operations Command (JSOC)—including, famously, the units formerly known as Delta Force and SEAL Team 6—is the primary national mission force. Although overseas, the National Mission Force often operates as a Joint Special Operations Task Force (with FBI augmentation), made up of dedicated teams assigned to JSOC, inside the United States, the FBI is in charge.

On the morning of January 6, most of these forces staged closer to downtown Washington, particularly after intelligence was received indicating a possible threat to FBI headquarters building or the FBI’s Washington Field Office. FBI tactical teams arrived on Capitol Hill early in the day to assist in the collection of evidence at sites—including the Republican and Democratic party national headquarters—where explosive devices were found. FBI SWAT teams and snipers were deployed to secure nearby congressional office buildings. Other FBI agents provided selective security around the U.S. Capitol and protection to congressional members and staff.

A tactical team of the Hostage Rescue Team was one of the first external federal agencies to actually enter the Capitol after protestors breached the building. In addition to augmentation of emergency security assets, one team coordinated with the U.S. Capitol Police and Secret Service to provide additional safeguarding of Vice President Pence, who had been moved to the underground parking structure beneath the Capitol, from where he was supposed to evacuate. But Pence refused to leave the building and stayed underground instead.

The presence of these extraordinary forces under the control of the Attorney General—and mostly operating under contingency plans that Congress and the U.S. Capitol Police were not privy to—added an additional layer of highly armed responders. The role that the military played in this highly classified operation is still unknown, though FBI sources tell Newsweek that military operators seconded to the FBI, and those on alert as part of the National Mission Force, were present in the metropolitan area. The lingering question is: What was it that the Justice Department saw that provoked it to see January 6 as an extraordinary event, something that the other agencies evidently missed.

“COVID-19 is a Designed Bioweapon with a Toxic structure that May be Replicated in Vaccines”. US Army Retired Colonel said

On “Dominion” shady ballots-counter Trump Appeals to Supreme Court (inside judges Barrett and Thomas pestered by Biden) on “Clinton Software”, rejected by Texas