The U.S. Senate failed to garner enough votes to condemn former President Donald Trump after a Democrat-led impeachment trial. Trump had been accused of “inciting an uprising” after his supporters rioted on Capitol Hill. On Saturday, in a 57-43 vote, the Senate acquitted Trump and concluded the second attempted impeachment against him without success. Only 7 Republicans supported the allegation. Therefore it was not possible to reach the 2-3 of the votes necessary for the conviction. 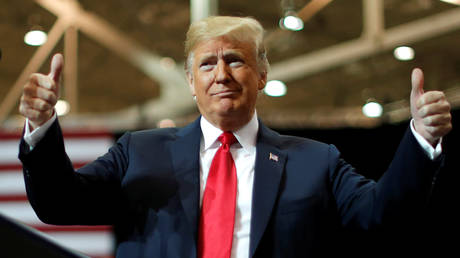 Thus ended the useless pillory staged by the Democrats just to humiliate the outgoing president. The Dem plot, however, managed to have devastating consequences in Italy with the birth of the new Draghi government controlled by the globalists …

Trump denounced the impeachment as “yet another phase of the greatest witch hunt in the history of our country.” He thanked his lawyers and the supporters who backed him through the Democrat effort to block him from ever seeking office again. The 74-year-old stopped short of saying that he will run for president in 2024, but he said the “Make America Great Again” movement has”only just begun.”

“In the months ahead, I have much to share with you, and I look forward to continuing our incredible journey together to achieve American greatness for all of our people,”Trump said in a statement immediately following Saturday’s Senate impeachment vote. “There has never been anything like it.”

Not even considering this shameful farce artificially constructed by the Masonic-financial mainstream of the Deep State, which failed like the previous impeachment, worthy of comment, I refer to the article below a month ago to understand what happened.

Donald Trump must thank Vice President Mike Pence. Not only because he refused to apply the shame of the 25th amendment by taking away his powers as if he were now mentally ill. But above all because Pence, as a fervent Pentecostal evangelical Christian, knows how to make the right use of prayer and mercy even towards those who by gross instinct claim their right to justice in an arbitrary, exuberant and dangerous way.

But Trump must also give a little thanks to the fearful Deep State conspirators who over the centuries and decades have changed tactics to the point of making him seem apparently stronger today than two historic and unforgettable presidents of the United States of America: Abraham Lincoln and Robert Fitzgerald Kennedy, both killed in circumstances that twenty American federal agencies have never been able to discover in any detail.

Just like them, Trump too had set his sights on the excessive power of bank seigniorage over the dollar which evolved into the financial domain of the Federal Reserve, the American central bank that fattens private banks every day like the European Central Bank (ECB).

The failure of the democratic and libertarian project of George Washington and his more or less Zionist-derived Freemasons began then, with those excellent and unforgettable crimes, and ended on Capitol Hill where an intrigue between legitimate rights to protest against certain electoral fraud – but it is not known to what extent and therefore not demonstrable in its weight – mixed with the belligerent impulses of those agitated demonstrators who in Italy, during the No-Tav squats and occupations, would have been free to injure the policemen just because they demonstrate under the revolutionary wing of the left.

I would like Nancy Pelosi, reconfirmed in her position as speaker of the House despite the double treacherous attack on the President of the United States of America perpetrated with the subtle weapon of the hired traitors of CIA and FBI intelligence in the RussiaGate and UkraineGate scandals, which melted like snow in the sun for their inconsistency, summon Bashar Al Assad, president of Syria to Congress and ask him for an opinion on American democracy that through the Central Intelligence Agency, during the administration of President Barack Obama and his deputy Joe Biden, now 46 ° US president, gifted the jihadist factions close to the Al Qaeda and ISIS terrorists a host of deadly TOW anti-tank missiles. But we know that doing violence in the home of others is not a sin for Democrats in name and not in fact …

Instead, the gloomy leader of the Blue, more like a Lucanian maciara than a parliamentarian, did not care in the least about ethical contradictions, historical falsehoods and not even the former CIA director who thanked the Deep State for the first impeachment against Trump, failed only because in the Senate the Reds voted against the continuation of the investigation.

Instead, the deputy Pelosa finds herself orchestrating the second impeachment against Trump which at least allows him, certainly not her, to go down in history not so much as the worst president of the USA, you can find worse by looking in biographies as in the WaterGate scandal , as the most persecuted in the shadow of a statue of liberty that ceased to have the slightest sense when the American Big Tech giants like Twitter, Facebook and YouTube, accomplices and financiers of both the Deep State and Biden, have decided to deprive a president of the right of speech and opinion by closing his public accounts.

Trump is an exuberant and sanguine man. As such, he expresses a stronger energy in his face than that which emerges from the expressiveness of his words. He urged his supporters not to give in to an electoral fraud on which not even the Supreme Court – making a terrible mistake – wanted to shed light. But he never incited them to storm Capitol Hill or enter the Capitol seat of Congress armed. For this to happen – thanks to huge security flaws – the FBI will have to decide if it is willing to do its job seriously and not limit itself to fake reports like in the murder of JFK in Dallas.

It should not be forgotten that in the post-election period the Trump government made a terrible affront to social networks by attacking the excessive power of FB with a disruptive legal action as reported by NBCNews on December 9th.

«The Federal Trade Commission sued to break up Facebook on Wednesday, asking a federal court to force the sell-off of assets such as Instagram and WhatsApp as independent businesses. Attorneys general from 48 states and territories said they were filing their own lawsuit against Facebook, reflecting the broad and bipartisan concern about how much power Facebook and its CEO Mark Zuckerberg have accumulated on the internet» wrote NBC.

Facebook’s dirty revenge that blocks anyone who is not aligned with progressive-communist-democratic thinking is inevitable. Zuckerberg is perhaps the most lousy example on earth of a Marxist extremist who enjoys playing with capital built on the skin of others.

It is at this time the news that New York City has cut all existing contracts with the companies of the Trump group, in order to perpetrate a revenge that goes from social to economic. The incumbent president for a few more days, until January 20, remains the scant consolation that as many as 197 deputies of the Republican party voted against impeachment for “inciting insurrection” by requiring the Democrats to approve it only thanks to thirty MPs: final result 232 in favor against 197 against.

The start of the procedure that will have to be confirmed by the Senate has been confirmed only by a part, in any case a majority, of Congress, confirming that the judgment against Trump as instigator of the violent occupation of Capitol Hill is not shared unanimously even by his own ones opponents. In order to continue the indictment, totally irrelevant under the governmental aspects given the imminent expiry of the presidential mandate but not from a judicial point of view, the Senate will have to confirm the impeachment has started.

This is a possible possibility given that unlike the first case in which the Republicans held the marjoram now the Dem senators are at par, 50 to 50, but they can count on the vote of the president by right, Vice President Kamala Harris. But for the Senate to approve the impeachment, 2/3 of the votes are needed and therefore at least 17 Republican senators will have to vote in favor.

But democracy, even the slightly perverse one of the Great Electors who decide the presidential elections in North America, is based on the numbers obviously doped by all those MPs widely funded in the electoral campaigns by the Lobby of Weapons and Big Pharma, as was Biden and as was, in part, Trump himself. Precisely for having given unsatisfactory answers to this world of legalized criminal corporations, it has signed its end. A political, social, economic but also a moral end. Because the goal of the Deep State is today to destroy a man, erroneous precisely because of his humanity, leaving him mortally and eternally wounded in his image to everlasting memory for all posterity who will dare to challenge the proven system of ethical corruption and mental even before material.

The terrible story of Dallas and JFk in 1963 has in fact taught the evil architects of the New World Order that one must never make a powerful martyr so that ordinary people do not begin to read, investigate, discover and think the truth …

That is to say that the civil institutions of the West are bastard daughters of compromises born in the Second World War between politics, Freemasonry, secret services and the mafia in an already vehement projection of the NWO (as witnessed by the Canadian navy commodore William Guy Carr in the Game). That’s why, for now, Mr. Trump is even stronger than Kennedy. Or at least much luckier to still be alive.