Vital CDC DATA: “Serious Adverse Events by mRNA COVID Vaccines 5.5 Times Higher than All Others in the US since 2009”

«Finally! Zachary Stieber at the Epoch Times managed to get the CDC to release the results of its VAERS safety signal monitoring for COVID-19 vaccines, and they paint a very alarming picture. The analyses cover VAERS reports for mRNA COVID vaccines from the period from the vaccine rollout on December 14, 2020 through to the end of July, 2022. The CDC admitted to only having started its safety signal analysis on March 25, 2022 (coincidentally 3 days after a lawyer at Children’s Health Defense wrote to them reminding them about our FOIA request for it)».

Thus begins the article by Josh Guetzkow, professor at the Institute of Criminology at the Hebrew University of Jerusalem. among the first to analyze and relaunch yet another explosive investigation by the young Stieber who is gaining attention throughout the USA for the scoop in the topic of vaccines.

This time he is the data that the Centers of Disease Control, the prevention health structures located in each of the United States of America. they are truly sensational and chilling. 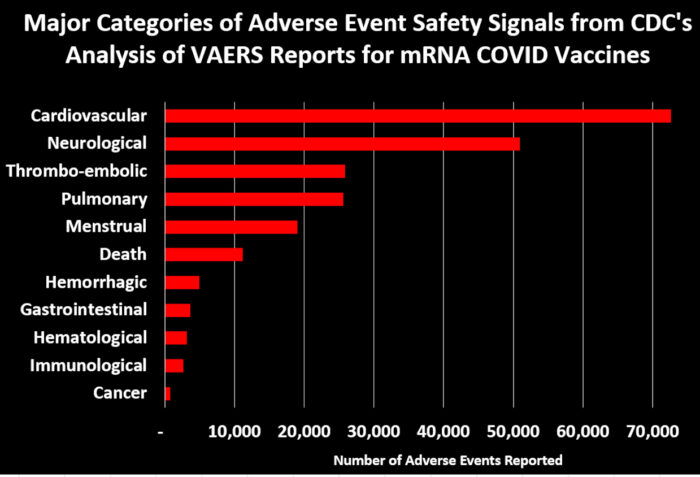 They are summarized in a single figure: «The CDC analysis shows that the number of serious adverse events reported in less than two years for mRNA COVID-19 vaccines is 5.5 times larger than all serious reports for vaccines given to adults in the US since 2009 (~73,000 vs. ~13,000)».

The disturbing statistic confirms the research done by Dr. Jessica Rose, a viral immunologist and virologist, who had “taken it upon herself to become a VAERS analyst to organize the data into complete figures to be transmitted to the public” and had revealed that in 2021 1000% more Adverse Reactions were recorded than in the last 10 years since there is systematic monitoring with pharmacovigilance.

Deaths after Vaccines in 2021 much more than in the Past 10 Years! “1000 % more Adverse Reactions’. Alarm by US Virologist to FDA

However, now it is the highest US health authority to confirm the alarm that Rose had reported to the Food and Drug Administration (FDA), the American drug regulator, without however being taken into the slightest consideration.

The same CDC, in recent weeks, had highlighted a very high number in the US for deaths from Covid break-through, that is, the mysterious infections that develop among vaccinated people and have raised the doubt that they can be triggered precisely as an adverse reaction to mRNA gene serums containing a genetically modified and attenuated type of the toxic Spike protein.

«Like me, you might be wondering why the CDC waited over 15 months before doing its first safety signal analysis of VAERS, despite having said in a document posted to its website that it would begin in early 2021—especially since VAERS is touted as our early warning vaccine safety system. You might also wonder how they could insist all the while that the COVID-19 vaccines are being subjected to the most rigorous safety monitoring the world has ever known. I’ll come back to that later. First I’m going to give a little background information on the analysis they did (which you can skip if you’re up to speed) and then describe what they found».

«Back in June 2022, the CDC replied to a Freedom of Information Act (FOIA) request for the safety signal monitoring of the Vaccine Adverse Events Reporting System (VAERS)—the one it had said it was going to do weekly beginning in early 2021. Their response was: we never did it. Then a little later they said they had been doing it from early on. But by August, 2022, they had finally gotten their story straight, saying that they actually did do it, but only from March 25, 2022 through end of July».

These are the same pathologies reported as serious and frequent adverse reactions by the maxi-study with active pharmacovigilance (i.e. follow-up of the patient’s course) that the FDA published only a few days ago, after the solicitation of the British Medical Journal which had denounced them the concealment.

«These are the same problems, even fatal ones, that are the subject of the medical-scientific investigations of our online journal, as in the case of the boom in deaths from neurological syndromes following the Pfizer or Moderna messenger RNA gene serums, later also confirmed by published research».

Professor Guetzkow further reports, mentioning that type of side effects in too many cases, even lethal, pointed out in the study by biophysicist Stephanie Seneff, former researcher at the Massachusetts Institute of Technology (MIT) in Cambridge, but also in a research by doctors at the university hospital of Nimes.

But among the most alarming pathologies detected after the anti-Covid vaccinations there are also the immune damages which, as reported by many doctors by now, can cause tumors, even lethal herpes, and autoimmune hepatitis.

«There were 770 different types of adverse events that showed safety signals in ages 18+, of which over 500 (or 2/3) had a larger safety signal than myocarditis/pericarditis».

«The CDC analysis shows that the number of serious adverse events reported in less than two years for mRNA COVID-19 vaccines is 5.5 times larger than all serious reports for vaccines given to adults in the US since 2009 (~73,000 vs. ~13,000). Twice as many mRNA COVID-19 vaccine reports were classified as serious compared to all other vaccines given to adults (11% vs. 5.5%). This meets the CDC definition of a safety signal» reads the article by the academician of the Institute of Criminology of the University of Jerusalem.

Very Dangerous Covid Boosters Authorized by FDA for Babies as 6 months. Despite a Disturbing Study on Bivalents

Practically the youngest are exposed to the risks of very serious side effects with consequences that can even be lethal in the face of the now known and statistically proven circumstance that Covid-19 in children and young people has an almost non-existent mortality.

«The safety signals cannot be dismissed as due to “stimulated,” exaggerated, fraudulent or otherwise artificially inflated reporting, nor can they be dismissed due to the huge number of COVID vaccines administered. There are several reasons why, but the simplest one is this: the safety signal analysis does not depend on the number of reports, but whether or not some AEs are reported at a higher rate for these vaccines than for other non-COVID vaccines. Other reasons are discussed in the full post below» concluded the professor of the Hebrew University of Jerusalem.

And then he detects a colossal mystery similar to the belated release of the number of deaths recorded in the first months of vaccination.

«In August, 2022, the CDC told the Epoch Times that the results of their safety signal analysis “were generally consistent with EB [Empirical Bayesian] data mining [conducted by the FDA], revealing no additional unexpected safety signals.”

So either the FDA’s data mining was consistent with the CDC’s method—meaning they “generally” found the same large number of highly alarming safety signals—or the signals they did find were expected. Or they were lying. We may never know because the FDA has refused to release their data mining results».

But, on the other hand, if and when some colossal “class action” starts in the USA, Pfizer will spread its arms and defend itself by claiming that it clearly warned, in the folds of the documents addressed to the FDA and CDC, that there were no data on myocarditis among children and that the toxicology of the new biotechnology of the mysterious nanoparticles “had not been thoroughly studied”.

Maybe because of the cursed graphene!

Its presence continues to be denied despite the existence of dozens of studies that prove its experimentation in nanomaterials for biomedical therapies since many years.

Un pensiero su “Vital CDC DATA: “Serious Adverse Events by mRNA COVID Vaccines 5.5 Times Higher than All Others in the US since 2009””